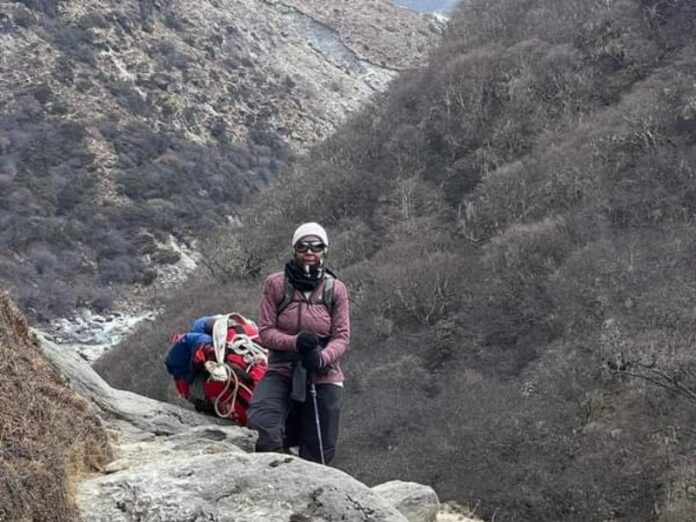 Since 23 March, the late rapper Riky Rick’s mother Louisa Zondo has been on a cold journey to summit Mount Everest in Nepal, to honour her late son, who died by committing suicide on 23 February, at only 34 years old.

Many celebrities, fans and family members have been honouring the rapper who was also a businessman and an actor through tribute songs, billboards and television adverts.

The following is part of the first letter posted on 23 March by Riky Rick’s mother, Louisa.

“Dearest MaRiky. It’s early hours of the morning on 23 March 2022 – 01h03, Nepali time, to be exact. 23 February 2022 is the day on which your spirit and body separated. I am lying on my back in a warm bed in the Bhudda Lounge, Phakding, Nepal. I’m in Nepal because I am on my way walking to Mount Everest Base Camp, MaRiky. I’m awake at this hour because I’m reflecting on life, death and the meaning of everything.

“Since your death last month, I’ve been starkly aware of the need in me to make sense of where I am and how I am called to be. I decided to proceed with this trek to Mount Everest Base Camp not only because I knew you would want me to do so, but also because I imagined it would present the perfect opportunity, over 14 days, for me to wrestle with the questions – (i) What is the moment; and (ii) How does this moment call me to be,” reads the first letter.

The following is part of the second letter posted on 24 March by Riky Rick’s mother, Louisa.

“Dear MaRiky, the experience of yesterday was beautiful. Aunt Xoli and I walked with our trekking team after connecting with them on Monday evening, 22 March. It was our Day 2 of the Mount Everest Base Camp trek. We left Phakding at about 09:00 and headed for Namche Bazaar. It was a 9 hour trek filled with laughter, cameradie, silence, and physical anguish of the body. We ascended from the altitude of 2600m to 3440m above sea level. I feel enormous gratitude that all of us in the team ended the day in high spirit and eager to treat our exhausted bodies to much-deserved rest.

“As I took in the unspeakable wonders of the mountain, the sense of you being part of it all was so real MaRiky…I laughed out loud and shouted out your name,” reads the second letter.

The following is part of the third letter posted on 25 March by Riky Rick’s mother, Louisa.

“Dear MaRiky, today – 24 March 2022 – is Day 5 of the team’s trek (the fourth day for Aunty Xoli and I). We had an “active” rest day which saw us walk slowly for three and a half hours to the Everest Viewing Hotel, 3880m above sea level.

“From the restaurant deck we were able to get a glimpse of the top of Mount Everest. This was a brief window of opportunity as the mountain-top soon became completely cloaked in clouds. How exhilarating this was!

“We encountered incredibly scenic landscapes during this walk, featuring the silent grazing of yaks throughout the mountainous terrain. My heart was filled with joy,” reads the third letter.

The average expedition time to Mount Everest “is around 10 weeks or two months”. But it can also take three months as some climbers like to spend more time before reaching the summit, to get used to the atmosphere, according to The Everester.org.

Louisa and her group of trekkers are expected to reach the mountain peak towards the end of May 2022.