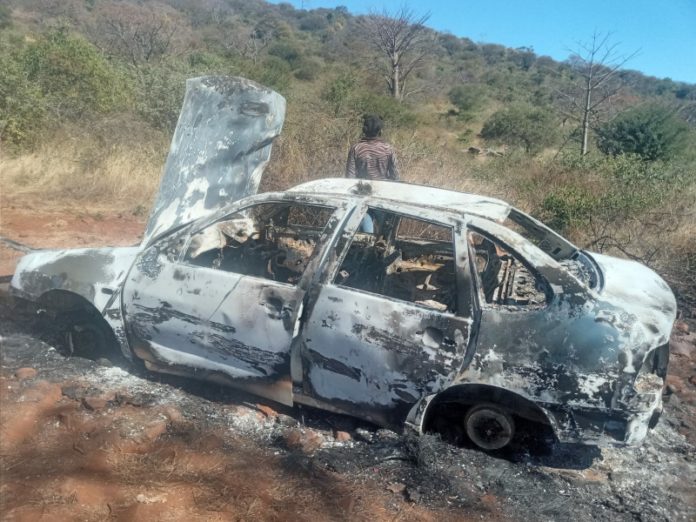 A pair of thugs had planned to murder their victim by setting her on fire, but the woman’s life was saved when local residents intervened.

Her would-be killers got a taste of their own medicine when their car was doused with petrol and set alight while one of the suspects was still inside.

The two men allegedly raped, stabbed and then set fire to the 21-year-old Vhembe TVET College student, who is currently being treated for serious injuries.

It is believed that one of the suspects dated the student and their relationship went sour.

The two men then kidnapped her on Sunday from Hamutsha at Makwarela and drove with her in the boot of their car to Nzhelele.

An eyewitness who saw the incident shared the description on social media and residents of Ha-Mphaila spotted the car.

The woman was allegedly raped by one of the two men before she was stabbed and dumped in the bushes.

A community member alerted some other local residents, who cornered the men and beat them up.

One of them managed to escape while the other was trapped in the car which angry residents set on fire with the petrol the men intended to use on their victim.

The badly injured woman was taken to the hospital and the man was saved from the burning car when the cops arrived.

Joshua Boko Simango of the South African Youth Congress, who witnessed the scene, said the woman was so badly burnt that she was unrecognisable.

“She is battered and in a very serious condition. The suspects are local boys whom I know well,” he said.

Limpopo police spokesperson Brigadier Motlafela Mojapelo confirmed that they arrested a man and have launched a manhunt for the suspect who ran away. The arrested suspect is under police guard in hospital.