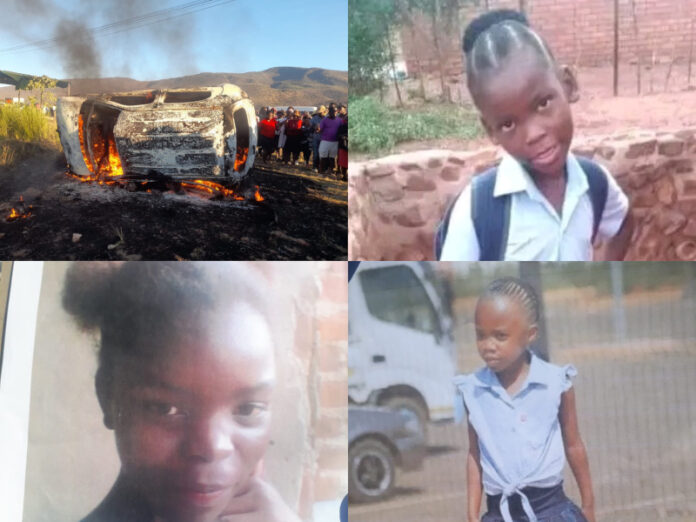 Two alleged kidnappers have been stoned and burnt to death in an act of mob justice in Limpopo after community members intercepted their attempt to flee following a failed abduction.

Three suspects attempted to rob and kidnap a 23-year-old woman in broad daylight after pulling up at the busy local plaza in Tshavhalovhedzi village in Nzhelele on Wednesday.

It is the latest incident of kidnapping in an area which has been dogged by kidnappings, particularly of children, in recent weeks.

According to a police statement, the suspects robbed the woman of her belongings and cellphone in full view of stunned shoppers.

They then attempted to force her into their car, but after she began screaming for help they left her and hastily drove away.

Meanwhile bystanders had been reporting the incident on a community WhatsApp group, and no sooner had the suspects sped off than locals began setting up a roadblock to stop them from getting away.

They didn’t get far, and the roadblock forced the speeding car into an accident, rolling it over and trapping its occupants.

Residents surrounded the suspects and pelted them with stones. They then set the vehicle alight with the men still inside. Two perished in the fire.

Before residents could kill the third suspect, police arrived at the scene and rescued him.

He was then taken to the Siloam police station, where residents had gathered to demand his release so that they could finish the job.

Tensions have been running high among locals in Nzhelele in recent weeks, in the wake of several child kidnappings.

Among those who disappeared without trace is nine-year-old Fiona Matodzi from Itsani who was abducted last week on her way to school.

Rudzani Muhanelwa, aged eight, of Ha-Mavhunga RDP Section also went missing after she was sent to get change at the local spaza shop on 5 August.

The Provincial Commissioner of Police in Limpopo Lieutenant General Thembi Hadebe, however, says these cases are not excuses for locals to resort to mob justice.

“The tendency of some community members to take the law into their own hands will be dealt with mercilessly and those responsible will be hunted down and brought to book,” he said.

Anyone with information that can assist the police to locate the three victims should urgently contact Detective Sergeant Manthakha Khorombi on 060 770 0002 /0159638034 or Crime Stop number 0860010111 or any nearest police station or MySAPSApp.