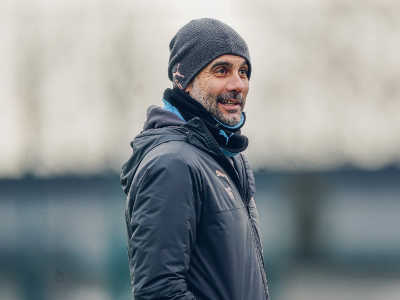 The seemingly invincible Manchester City switch focus to the first leg of the UEFA Champions League round of 16 tie against Bundesliga side Borrusia Monchengladbach on Wednesday at Puskas Arena in Budapest.

The teams are facing each other for the seventh time. In their previous encounter Gladbach beat City 4-2 on aggregate in the quarter-finals of the 1978/79 UEFA Cup.

Pep Guardiola’s side approaches the match with a 25-match unbeaten record in all competitions. The Citizens have reached the knockout stages of the Champions League for the eighth consecutive season, the longest run for an English club.

Guardiola’s side finished on top of Group C, unbeaten in five matches.

Manchester City last suffered a defeat in November 2020 against Tottenham Hotspur and since then they have been on cruise control, with 13 consecutive wins in 18 matches in all competitions.

Guardiola said they will approach the game like any other game.

“We won’t change anything other than little details to adapt a bit,” said Guardiola on the Manchester City Twitter page.

“We are not used to playing them because they play in Germany but we will play our game and try to get a result just like we have done so far,” Guardiola said.

The Citizens will be boosted by the return to full fitness of midfield kingpin Kevin De Bruyne and Argentinean talisman Sergio Aguero, who formed part of the Arsenal victory over the weekend.

“Everyone except Nathan Ake is fit,” Guardiola said.