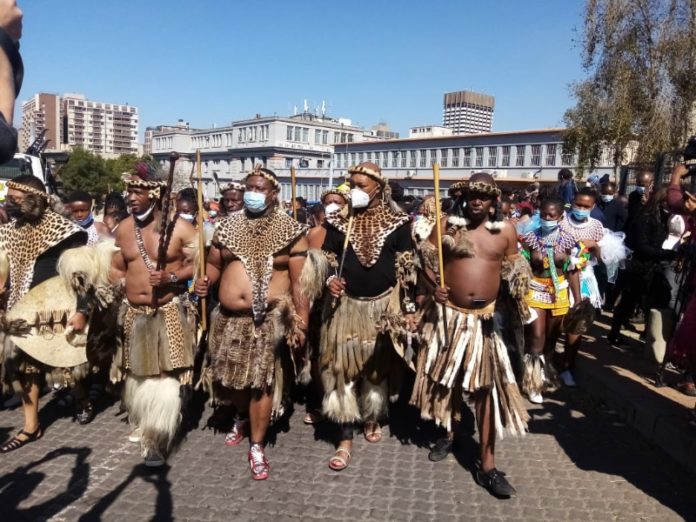 Queen Regent Mantfombi Dlamini Zulu’s journey back to her ancestors started this morning from the Wits Donald Gordon Medical Centre in Johannesburg where she took her last breath.

The Princes and Princesses arrived early in the morning with amabutho kaZulu, the Isiphithiphithi group and members of the Zulu and Swati Royal families to fetch her spirit as a cultural practice done for a person who died away from home.

Prince Lungelo and Princess Ntandoyesizwe battled to contain their tears while Princess Nomkhosi was overwhelmed by her emotions with tears running down her cheeks.

The Isiphithiphithi group which was formed by Queen Regent Mantfombi and the Reed Dance Maidens performed most of the renditions that were loved by the late Queen.

After the Royal Family members completed the rituals they headed to the Hillbrow Mortuary to collect the mortal remains of the late Queen and then went straight to KZN at her Khangelamankengana Royal Palace in the Nkunzana area of Nongoma.

Many people lined the N3 and N17 to Mpumalanga, bowing their heads and paying their respects as the convoy passed and toll gates opened emergency lanes to allow the Royal convoy to pass without delay.

The late Queen will be buried tomorrow night at Khangelamankengana Royal Palace.