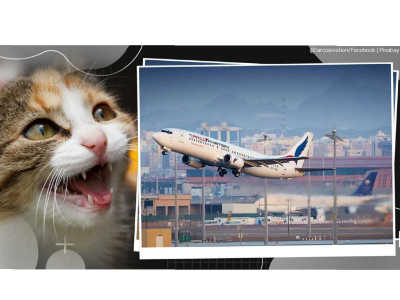 A passenger plane in Sudan was forced to make an emergency landing after experiencing some mid-air purr-bulence.

Local publication Al Rakoba reports that the pilot of Tarco Aviation’s flight 3T-234 was attacked by a stowaway cat.

The plane was only half an hour into its journey, from Khartoum International Airport en-route to Qatar’s capital Doha, when the “unregistered passenger” was spotted in the pilot’s cabin.

The feline hijacker was reportedly hostile, turning on the flight captain and resisting all attempts made to capture it.

Unable to detain the unruly passenger, the captain made the decision to turn back to Khartoum.

The cat reportedly did not belong to any of the passengers onboard and is most likely a stray. Al Rakoba obtained information that the plane was kept overnight in the hangar, during which time the cat snuck into the cockpit.

Surprisingly, cats have a long and well-recorded history of causing cat-astrophes on airplanes.

Last month, a cat crept onto a plane belonging to an Isreali airline, EL AL, and chewed-up much of the aircraft’s plastic interiors.

In 2004, a Brussels Airlines pilot was attacked by a pet cat, who escaped from its basket and bolted for the cockpit. It reportedly lunged at the pilot after a steward opened the cabin door to begin serving refreshments.