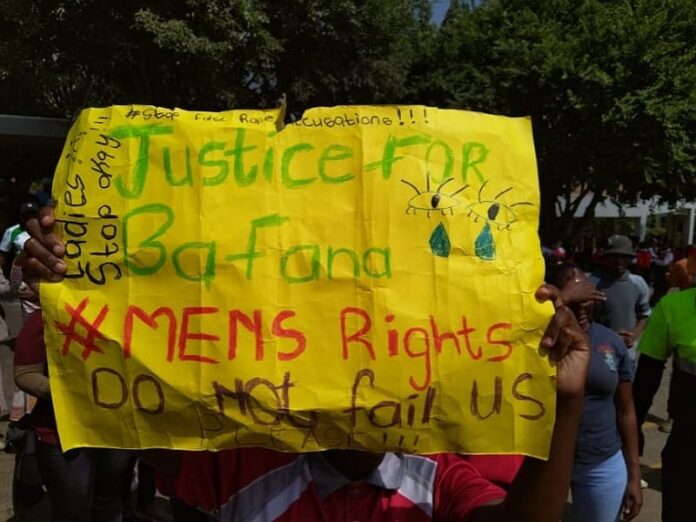 Grade 11 pupils from Hoërskool Kriel High, in Kriel Emalahleni, refused to sit for their examinations on Tuesday in the name of justice for Bafana Sithole.

Sithole, a 17-year-old from Thubelihle in Kriel, committed suicide on Thursday, 17 November, a short while after finishing his math exam.

This happened after Sithole was accused of raping Amandle Ndimandze, a girl in grade 9, at the school. She then withdrew her allegations and said she had been joking.

On Tuesday morning, the learners who were set to write their English exam staged a protest outside the school’s premises and demanded justice to be served for a fellow classmate.

Sithole, who hanged himself with his red school tie, was discovered dead in a classroom storage area. The school’s head boy left his mother a note.

In the letter, he wrote: “Mama, by the time you are reading this, I’ll be already gone.

“What did I do to her to hate me like this? I am gone. May she forgive me for what I did to her but I didn’t rape her. I’m not a rapist.”

“It is very painful to lose him like this,” Ndebele told Scrolla.Africa, saying that the school did not investigate the accuser’s claims thoroughly enough.

“To make things worse the school did not investigate enough, they only took the rumours, demoted him from his position as a head of the school, and took away his badge,” says Ndebele.

The spokesperson for the Department of Education in Mpumalanga, Gerald Sambo, confirmed the protest, saying the learners could not write English Home Language and First Additional Language Paper 1.

“The school, in consultation with the Circuit Manager, already made arrangements that the grade 11 English Home Language and First Additional Language Paper 1 be written on Monday, 28 November 2022,” says Sambo.

“The Commission is imploring law enforcement to ensure that justice takes its course. We are also aware that the Department of Education has indicated they will determine the course of action to be undertaken as soon as it receives a report from the investigation team, while the police have opened an inquest into the cause of death of the pupil,” says Mazibuko.