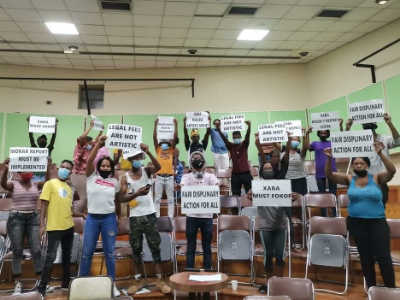 Since last Wednesday, local Free State artists have been protesting outside the Performing Arts Centre of the Free State and are even sleeping in CEO Moeketsi Xaba’s office.

And they threaten to do this until Xaba is suspended and investigated.

The artists claim they are owed money for royalties and for performing at the centre.

Xaba has not been seen at his office since the protest started a week ago as all the buildings and offices have been turned into a temporary home for the angry performers who come from five districts.

Provincial coordinator of the Cultural and Creative Industries Federation of SA, Mbuyiselo Nqodi said Xaba has been refusing to communicate.

“He must be taken for disciplinary action or he must leave the office,” Nqodi told Scrolla.Africa.

“This is not about the artists but the management. The performances at the centre are still happening.”

Actress and poet Winnie Morabe said she is from Welkom and she hasn’t changed her clothes since last Wednesday.

“But I have two kids to feed at home. We don’t know where our next meal will be coming from. We decided to sleep in the CEO’s office until our voices are heard,” she said.

Actor Tumi Molehe from QwaQwa said the forensic report alleges that the CEO is implicated in corruption and fraud and they are prepared to stay until they get answers or Xaba is suspended.

Pacofs council chairperson Advocate Thato Moeeng said the matters raised by the artists have been duly acknowledged and are being investigated by the new Pacofs appointed council.

“We are unreservedly committed to ensuring that fairness and transparency remain at the heart of all operations and that the integrity of the organisation is maintained.”