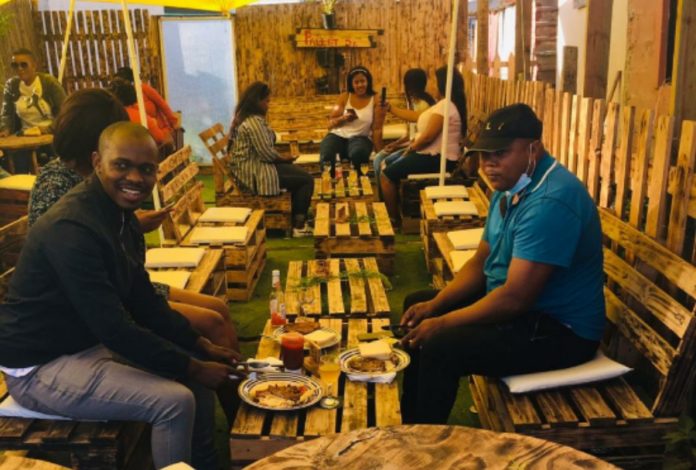 Unemployed Ulundi Mpulu could look at his mother to support him or he could rely on hard work and initiative.

So, the 22-year-old from Motherwell, Port Elizabeth built a business that he runs from his family home. He calls his establishment the House of Pallets.

At first Ulundi, or The Pallet Doctor as people call him, collected discarded wooden pallets that he crafted into benches, boundary walls, wooden bags and African traditional art. But then he turned it into a restaurant that offers African cuisine.

Ulundi was later joined by his mother, Nomfundo and some of his siblings. The busy restaurant serves various isiXhosa traditional dishes.

“I have come to realise that the best way to succeed in life is to work hard,” he said.

“We are a family of ten siblings. Our mother depends on social grants to sustain the entire family.”

He said he would also want to develop the art gallery and make it one of the best township galleries in the country, using the skills he learnt from his grandfather.

Ulundi said he receives visitors from as far away as Colchester, Uitenhage, and Humansdorp.

“These are people with a keen interest in knowing what Motherwell looks like. I promote township tourism by offering them the artworks and showing them that traditional food is the best,” he said.

He encourages his patrons to comply with the Covid-19 regulations.

Thamsaqa Jantjies from Addo often brings his wife and two children to eat traditional samp at the House of Pallets.

“I hope the House of Pallets will one day be converted into a tourist centre. The place offers quality food and their service is the best,” said Thamsaqa.