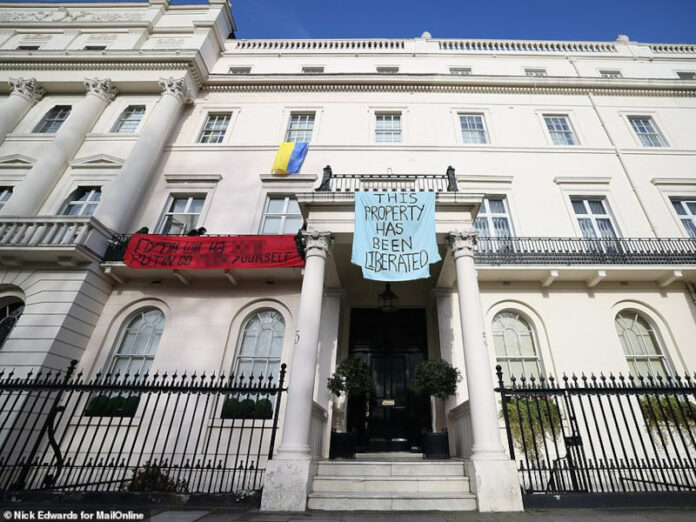 Pro-Ukraine protesters occupied a R980 million mansion belonging to Russian billionaire Oleg Deripaska after he was sanctioned by the British government.

The activists broke into the property in London in the early hours of Monday morning. They hung banners outside the balconies that read, “The property has been liberated” and “Putin go f*** yourself.”

Deripaska was among the list of seven Russian businessmen who were sanctioned by the United Kingdom government last Thursday.

The mansion is said to be one of London’s most expensive terraced houses, previously belonging to a member of parliament.

A court case in 2008 revealed that the property was heavily guarded by security presence all-year round despite the Russian billionaire only occupying the mansion a few days each year.

A Metropolitan police spokesperson said that they were aware of the group that had broken into the property with several officials remaining on the scene.

“Police were called shortly after 1am on Monday, 14 March to a residential property in Belgrave Square, SW1,” the spokesperson said in a statement.

The sanctions handed out on Thursday froze the assets of the Russians and barred them from doing any transactions in the United Kingdom.

Deripaska however claimed that he was wrongly punished by the British government.

“As there is not a single fact in support of the fantasies of Boris Johnson’s cabinet it will be for the courts and the police to decide the future of all in this sanctions story,” he wrote on Twitter.

The 54-year-old Russian is said to have a net-worth of around R62 billion as he has in the past been labelled as Russian President Vladimir Putin’s “most loyal oligarchs”.

This is not the first time the Russian has faced sanctions; in 2018 he was sanctioned by the United States over his ties to the Russian government with allegations of cyber-attacks and election meddling.