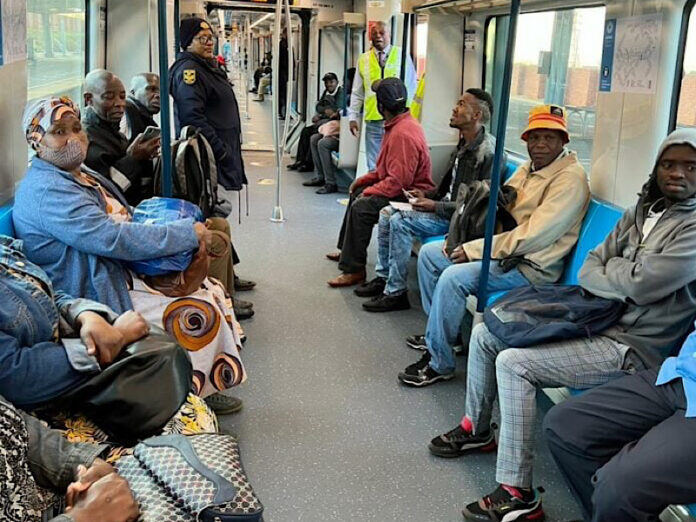 In the past, after boarding a train one could buy fruit and vegetables and gamble, and those who wanted to feed their soul could head for the coaches where sermons were being preached.

But the Passenger Rail Agency of South Africa (Prasa) has put a stop to all this.

The agency and the Department of Transport recently launched new trains to revive the rail system that almost collapsed following vandalism, arson and the theft of railway lines and cables.

Preaching, gambling and trading in these trains are no longer permitted.

Abusing Prasa personnel and playing in the passageways or blocking them will also be a thing of the past.

Many are enraged, and religious people and priests are fuming.

“What harm do we cause spreading God’s word? Instead of making sure that trains come on time and don’t break, inconveniencing commuters, [Prasa is] targeting God. We pray that, like Saul, they will have their Damascus moment,” he said.

Commuter Bertha Mtsweni said she would defy the regulations. “I will not be the first one; there were once the likes of Shadrach, Meshach and Abednego. I will be singing the loudest, without any fear, for I trust in the Lord,” she said.

Prasa spokesperson Lillian Mofokeng said the new trains are different to the old ones.

“People can see, and freely walk, through all the coaches due to the open design of the new train set,” she said.

Mofokeng said [the rules were] in the interest of prioritising commuter safety, information, journey comfort, cleanliness, convenience and universal accessibility.

“Prasa has embarked on a campaign to educate commuters about the new rules. These activities have demonstrated over the years that they inconvenience many commuters and limit free movement inside the train,” she said.

Pictured above: Passengers and Prasa staff will be able to move freely on the new trains but no preaching or selling will be allowed