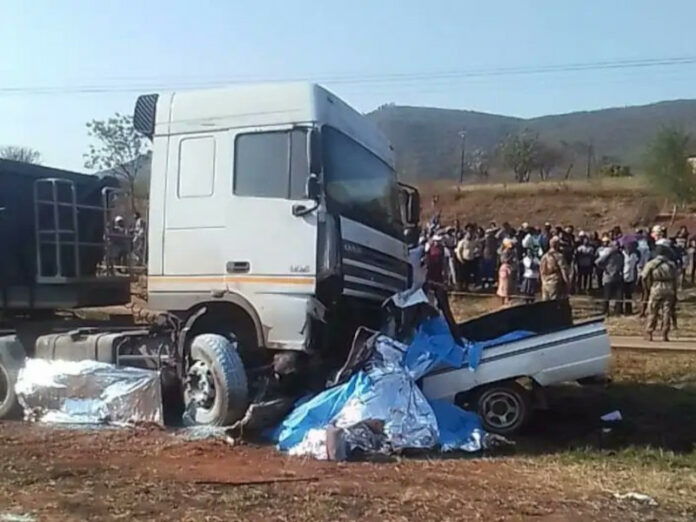 A report has found that the truck driver involved in the fatal crash last Friday in Pongola was responsible for the deaths of the 20 people who perished in the accident.

Delivering the report of the crash on Thursday, Transport Minister Fikile Mbalula said the truck driver, Siyabonga Siyaya, was “reckless” and “extremely dangerous”.

Eighteen of those killed in the crash were primary schoolchildren. They were being transported in a bakkie on the N2 when it collided head-on with the truck Siyaya was driving.

Mbalula said Siyaya had driven on the oncoming lane for approximately 1.2 kilometres, forcing vehicles to swerve out of the way as it pelted towards them.

“The driver never made an attempt to return to his correct lane, but continued against oncoming traffic, putting the lives of other motorists at risk,” said Mbalula.

In addition, “the driver of the articulated truck overtook multiple vehicles where this action was prohibited by no overtaking lanes in a dangerous and unlawful manner”.

The report, which was issued by the Road Traffic Management Corporation, concluded that driver error was a contributing factor to the deadly crash.

Mbulula said the truck driver rammed into the bakkie and dragged it for more than 200 metres before the vehicles came to a halt.

The bakkie had no canopy and the schoolchildren were flung out of the back of the vehicle “like sardines”, said Mbalula.

Although responsibility for the crash lies with Siyaya, Mbalula said that it is illegal and “extremely dangerous” for people to use bakkies to transport children to school.

Tens of children being crammed into the back of a bakkie – which is only licensed to seat three people in total – is a country-wide issue and highlights the plight of scholar transport.

“It happens everywhere in the country, where people are using vans to transport human beings like as if zinkukhu (chickens),” said Mbalula.

Mbalula said the National Traffic Road Act of 1996, amended on 11 May 2017, prohibits the transportation of schoolchildren in bakkies.

The report will be handed over to the National Prosecuting Authority.

Siyaya appeared at the Pongola Magistrate’s Court on Monday on counts of culpable homicide.

The case was postponed to Monday for the bail hearing.

There will be a mass funeral in Pongola on Saturday for the 20 victims of the crash.