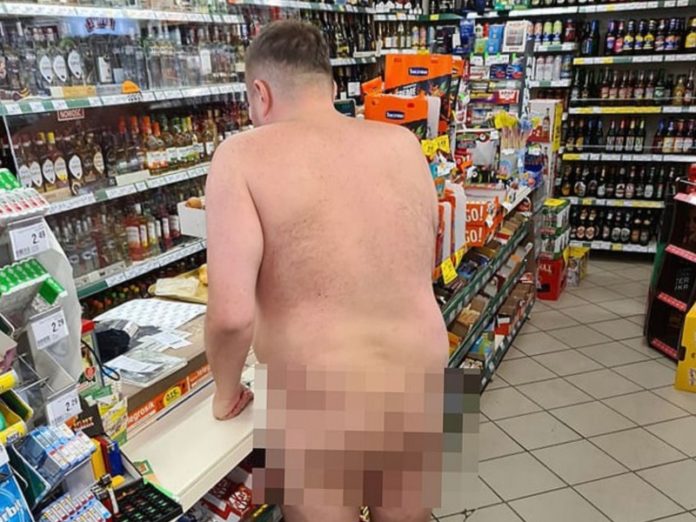 A state prosecutor in Poland has been suspended after he took a quick walk down to the local grocery shop stark naked.

The 38-year-old provided quite the spectacle to his fellow customers, as he strolled into the shop in the city of Świdnica in Poland to buy a four-pack of beer.

The man has been identified as Maciej W., a district prosecutor who practices locally. He was, however, reportedly enjoying a holiday when the incident took place last Thursday.

One of the stunned witnesses took photographs of Maciej, which were later published by local news site Swidnica24, and have since gone viral.

In one photo, he is seen approaching the shop counter to pay for the beers. Unfortunately, the pictures don’t capture the looks of surprise by Maciej’s fellow customers.

In another picture, he is captured wandering down a cobbled street, leaving a set of mysterious wet footprints behind him.

In the next photo, he’s seen strolling through a local park, catching some of the sun’s rays while he does so.

The incident was swiftly reported to the Swidnica Poviat police station, who dispatched officers to arrest the man for public indecency.

Police spokesperson Magdalena Ząbek told Swidnica24 that the man was arrested before being “handed over to his family.”

Lukasz Lapczyński, a spokesperson for the prosecutor’s office, said in an official statement: “The prosecutor of the district prosecutor’s office in Swidnica, who is the subject of media reports, was immediately suspended from his duties, and proceedings have been initiated for his failure to uphold the dignity of his office.”

On top of his suspension, Maciej could also face a slew of further punishments.

“Disciplinary punishment for the public prosecutor may be a warning, reprimand, reduction of his basic salary, a fine, removal from the position held, transfer to another place of service or expulsion from the prosecutor’s service,” added Lapczyński.

The pictures have caused a stir on social media. One user on Twitter pondered, “I’d hate to think where he put his credit card.”