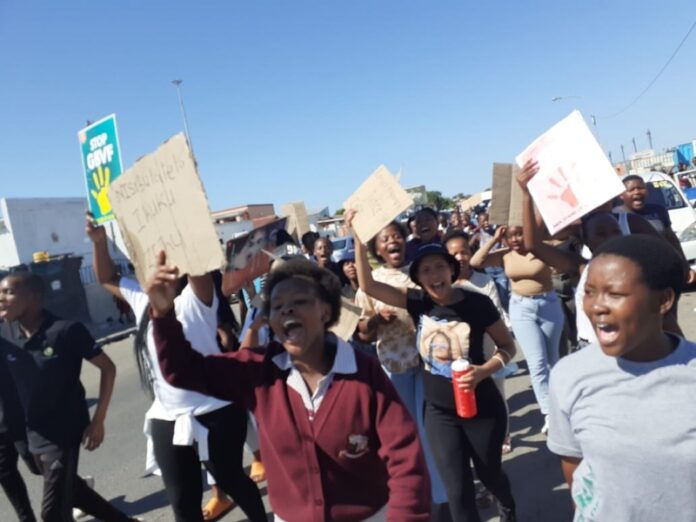 A 15-year-old girl who was allegedly raped and murdered has been discovered at a garbage site in Philippi near Cape Town – the third body of a teenager to be dumped at the same site in 10 months.

Angry residents marched on the nearby Nyanga Police Station on Saturday to protest after the discovery of the body of Zintle Tsewu who disappeared the previous Saturday.

Nyanga station commander Brigadier Vuyisile Ncata, addressing the police’s inability to find the killers, blamed the fact that police cannot operate after dark because their generator has been stolen.

The crowd of about 200 also marched to the office of the area’s ward councillor, Melikhaya Gadeni, demanding that the dumping site be cleared in the wake of the three murders.

Amahle Quku, 16, was also found dead after she was raped in the same dumping site in Philippi late in 2021.

The lifeless body of Sinawo Bekindawo, 17, was also discovered in the same site in June 2021.

Bekindawo was also raped before she was killed.

Tsewu’s family last saw her on the afternoon of 12 March when she was going out with friends on a drinking spree. Her body was discovered the following morning.

“We want justice for her. Police should leave no stone unturned in finding the perpetrators,” said Nokwayiyo Tsewu.

Among the demands of protestors was for a 24-hour mobile police station to be erected in Philippi as the area’s current station is only open eight hours a day – from 9am – 5pm.

Ncata told the protesters he would work with the sub-council to identify land to build a police station.

“There is no electricity at the police station and police cannot operate in the dark because that would be dangerous to themselves, that is why they close after sunset. There is no generator and the police cannot work after hours in darkness,” Ncata said.

“After hours, police working in Philippi relocate to Nyanga police station. The police station used to be open 24 hours but there was a problem with electricity when community members destroyed electricity infrastructure,” he explained.