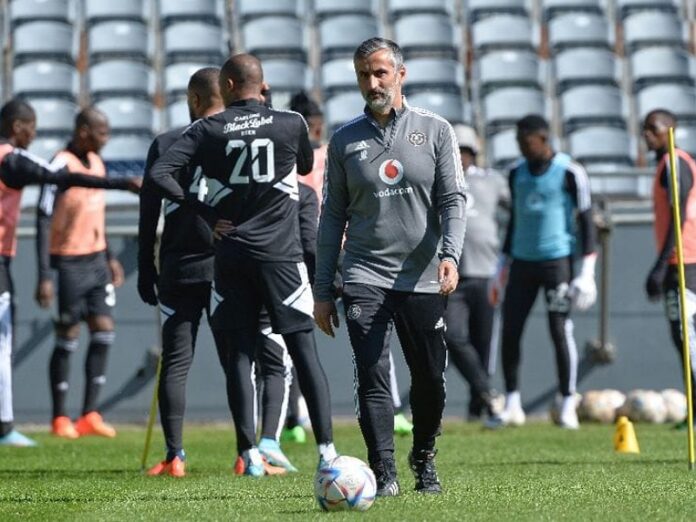 Orlando Pirates coach José Luis Riveiro has admitted the dismissal of defender, Tapelo Xoki, made life difficult for them in the Carling Black Label (CBL) Cup final against Mamelodi Sundowns on Saturday.

Sundowns cruised to a 4-0 victory at FNB Stadium, taking advantage of Pirates being a man down after Xoki was red-carded in the 21st minute.

Two minutes after the Buccaneers centre-back was sent for an early shower, the floodgates opened for Masandawana who grabbed their first goal through Sphelele Mkhulise.

“The fact that we had to play with 10 players, obviously it’s an issue. We could not manage the numerical inferiority after the red card,” says Riveiro.

He says it was impossible to come back into the game in the second half.

“I was happy with how the players fought despite us being a man down. They fought even despite the numerical disadvantage… We got a red card and there was an excellent team in front of us and they took advantage of the situation,” says Riveiro.

The CBL Cup was a one-day event and the final came after Sundowns and Pirates had participated in the semi-finals earlier on in the day.

Masandawana had a longer period of rest after playing their semi-final match against AmaZulu on Saturday morning.

“It’s difficult to analyse a game that you play immediately after another game,” said Riveiro.

“We lost control of the game and they had an excellent group of players attacking us and they got the advantage very quickly after the red card.”

Riveiro says he’s proud of the way his team behaved the whole week from the time they won the MTN8 final until their game on Saturday at the CBL Cup.

“We played a beautiful derby and got a right to be in the final. But in the end, it was too much for us, it was extra and we just have to move on,” adds Riveiro.

By winning the Beer Cup, Sundowns turned the tables on Pirates who had beaten them 3-0 in the MTN8 semis three weeks earlier.