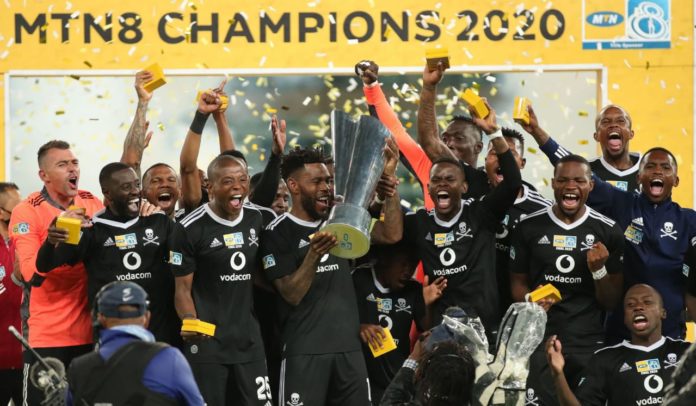 Orlando Pirates coach Josef Zinnbauer says winning his first silverware for the club in six years will open a lot of opportunities for the Soweto giants this season.

On Saturday night it was all smiles for Buccaneers after coming from a goal down to lifting the MTN8 trophy by beating Bloemfontein Celtic 2-1 at the Moses Mabhida Stadium, in Durban.

“I’m happy to win this trophy for the club after so many years. Though it’s still a long way to go to the next title this win has surely opened up opportunities for us. The next title is the league (DStv Premiership) and we still need to get ourselves back into the race,” said Zinnbauer.

The German-born coach also dedicated the win to his son Fabio who is still in a coma. Fabio was involved in a horrific car accident in Nuremberg in October.

“It’s still hard for me and my family. My son is still in a coma but at least he is better than before. I dedicate this trophy to him and my family,” added Zinnbauer.

Celtic players will be devastated at losing on Saturday night. It was their second final defeat in a space of three months.

They lost 1-0 to Mamelodi Sundowns in the Nedbank Cup final in September. But their coach John Maduka has taken the defeat like a man.

“Yes my players are devastated by this defeat. But they have accepted it. They gave it their all and I can’t fault them. We lost with honour,” said Maduka.

Celtic finished the match with ten players after defender Ronald Pfumbidzai was shown a straight red card for fouling Thembinkosi Lorch in the box. Referee Luxolo Badi gave Pirates a penalty and Lorch took it and scored a winning goal for Bucs.

Maduka is still not convinced that it should have been a penalty for Bucs.

“At a first glance I thought the incident happened outside of the box. But I still have to look at the video to be satisfied. I will never blame my player for that foul. Whatever happens we will take it as a team. We win as a team and we lose as a team,” added Maduka.