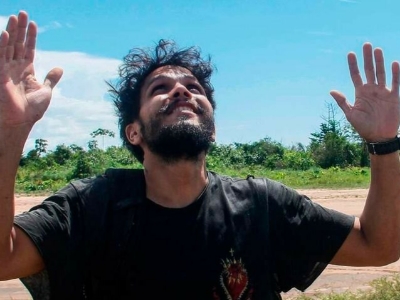 Startled chestnut pickers along the northern bank of the Amazon river in Brazil looked up to see a barely-alive man in rags coming towards them out of the forest!

It turned out the man had crashed his plane when the engine malfunctioned, then marched through the Amazon rainforest to arrive on the doorstep of the chestnut pickers.

When he saw a white tarpaulin which covered the chestnuts on 8 March, it was the first sign of humanity the man had seen since his plane had crashed.

Antonio Sena took off from Alenquer in Para on 28 January bound for the nearby city of Almeirim.

He was reportedly transporting cargo to an illegal gold mine in the rainforest, known as California when the plane’s engine malfunctioned.

Sena managed to land the plane in a valley without sustaining any major injuries.

Smoke was pouring from the engine and he was covered in oil so he grabbed all the provisions he could carry, threw some bottles of water and other provisions inside a backpack and ran for his life.

Shortly after, the plane exploded.

Believing that rescue helicopters would search for him, Sena set up camp nearby but after a week he realised he was on his own.

Following the morning sun, he decided to head east, eating the same fruit he saw the monkeys eating and managed to get three blue tinamou bird eggs.

“There was water, but no food. I was exposed to predators like jaguars, crocodiles and anacondas,” he later told a Brazilian TV station.

Four weeks later, Sena had lost over 25 kilos. He was exhausted and dehydrated when he finally stumbled across the chestnut pickers.

“The only thing that enabled me to come through that situation alive was the love I have for my family. I really had to see my parents and my brother and sister again,” he said.