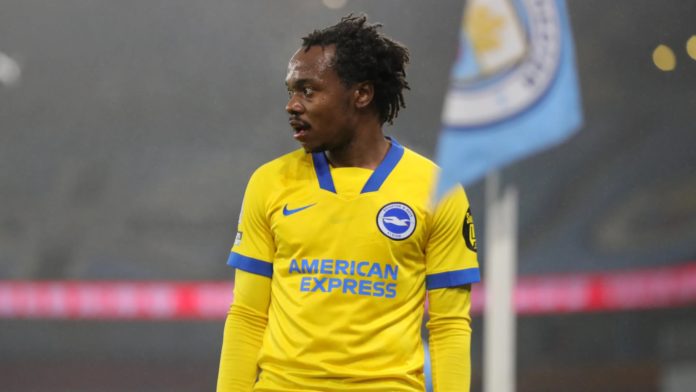 Tau made his first start for Brighton on Wednesday in their 1-0 away defeat at Manchester City.

The 26-year-old however was substituted in the 67th minute but not without leaving a good impression on his coach Graham Potter.

“It’s been a big week for Percy Tau. He has attributes that can help us in this tough match,” said Potter on the club’s Twitter page.

Tau’s impressive two-year loan spell in Belgium convinced Potter that he is ready for the EPL. The Mpumalanga-born midfielder joined Brighton in 2018 from Mamelodi Sundowns but was quickly loaned out without kicking the ball at Brighton.

His first taste of football abroad was with Union SG in Belgium in the 2018/19 season. But he made it big at Club Brugge the following season (2019/20) where he got a chance to play in the UEFA Champions League.

He played 14 matches and scored four goals for Anderlecht before Potter decided to call him back from his loan. He rejoined Brighton last week just days after the current January transfer window opened.

Last Sunday he made his official debut for Brighton coming off the bench in the FA Cup against Newport County. Wednesday’s performance left people talking, even City’s coach Pep Guardiola.

“The people up front for Brighton are so fast, with Percy Tau and Neal Maupay. They run until the last minute,” said Guardiola.