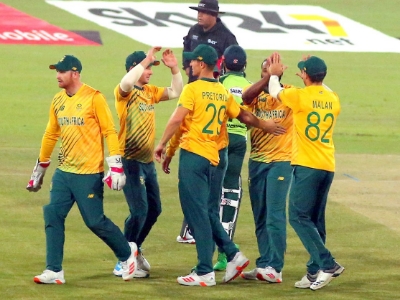 Once again the Proteas elected to bowl first and for the first five overs it looked like a good decision as Pakistan lost two wickets – but match winning, dangerman Mohammad Rizwan was in front of the wickets and scoring at a strike rate of almost 200%.

Then Tabraiz Shamsi got going and pinned the Pakistanis back (conceding a miserly 16 off his four overs and took one wicket) and things started looking good for the Proteas. Even Rizwan was looking a bit frustrated as his strike rate dwindled down to 124% – and he lost his wicket for 51 for 40 balls.

With dogged determination that has been sadly missing from South Africa, their performance in the field was tough, enthusiastic and gutsy. Pakistan were limited to 144 for seven, with Dwaine Pretorius taking a brilliant five wickets and conceding only 17 runs.

At the end of the Pakistani innings it was comforting to know that South Africa had done very little wrong. With only one dropped catch, their performance in the field was as good as it has ever been.

As Pakistan started bowling, the conditions came up for scrutiny. Did South Africa play well, or did Pakistan do the best the wicket would allow?

Well, after 8 overs, it appeared that it was all over bar the shouting, with South Africa at 76 for two, already close to the required run-rate, and Pite van Biljon and Reeza Hendricks punishing the loose balls with Haris Rauf bowling as badly as in the first match, handing the Proteas 26 runs in 12 balls.

There was a little wobble when South Africa’s top scorers Hendricks and Van Biljon (42 each) went out in quick succession, but in the end South Africa cruised to victory with almost four overs to spare.

A series win is beckoning for both teams. It could be a classic match.