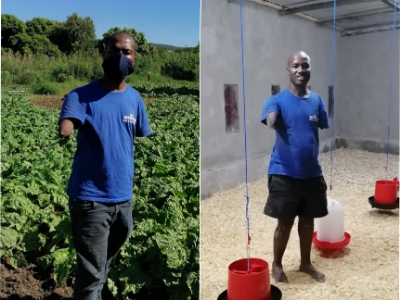 In spite of being born without arms, Sibusiso Mogale has always gone all out to make a success of his life.

The young man from Ngodini in Mpumalanga represented South Africa in international competitions and won several medals and now he has ventured into farming.

“My grandmother is the reason I’m farming. She made me fall in love with it,” he said.

Mogale said that he resigned from his job in 2018 as an administrator to concentrate on farming.

When he started he worked on his grandmother’s plot but he has expanded into neighbouring plots with unworked land.

“I enjoy everything related to farming and my disability has not stopped me,” he said.

“I love being on the land and I also enjoy tending to my poultry project. I look forward to owning my own farm,” he said.

Mogale keeps himself motivated by seeing others succeed but most of all, he is doing this for his daughter.

This year Mogale honoured the elderly women by giving them spinach to boost their iron levels.

“I was raised by my mother and grandmother. I am the man I am because they moulded me to be strong,” he said.

“Giving the gogos the spinach is the least I can do.”

Mogale has succeeded in everything he has attempted and he intends to keep it that way.

For now, he is driving himself around, supplying Mpumalanga with fresh chickens, vegetables and produce.