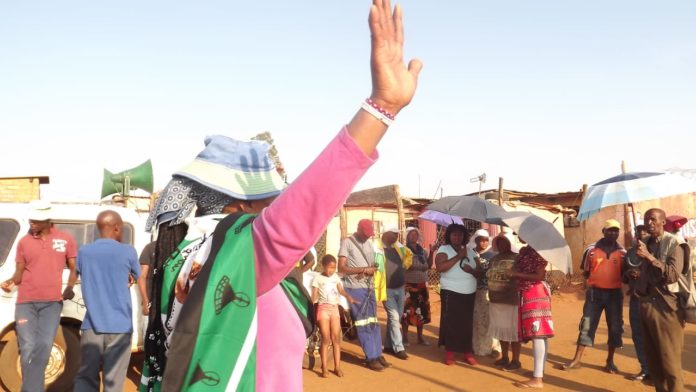 In the troubled areas of the West Rand of Gauteng, Basothos – who are known for wearing blankets – have come forward to tell the community that their blankets don’t automatically make them bad people.

Desperate residents of the townships of Tambo, Mandela, Spooktown and Silver City have been terrorised by gangs for years.

A well-respected and proud Sotho speaking gobela left her bones and indumba to join the neighbours in an effort to form a group against the Basotho gangs.

Gobela Mmathabo Thokoa ululated and told a crowd in Tambo Section, Bekkersdal, on Wednesday that the impimpi among them must know that they can’t hide anymore.

“I’m tired of hearing the Basotho clan and ancestral name tainted with the blood of innocent people. Guided by my ancestors, I’m ready to fight anybody who puts the Sotho name to shame,” she said.

“People regard everyone wearing a blanket as a member of a Basotho gang, but crime does not wear the name of a clan. We need to report the crime to the police who must deal with it.”

Thomas Ndlovu told Scrolla.Africa that every resident had donated R5 to buy whistles. They will blow the whistles whenever anyone is in trouble to alert the community who will come to assist.

Thomas said the worst time of the day is in the early evening when people are watching television.

“That’s when they strike. That’s when you see bullets flying through the shacks,” said Thomas.

Community leader and the ANC ward committee member, Gaddafi Ncele said people must not allow strangers into their homes because those people turn against them and rob them.

“We need to unite and stand together to fight the gangs,” said Ncele.