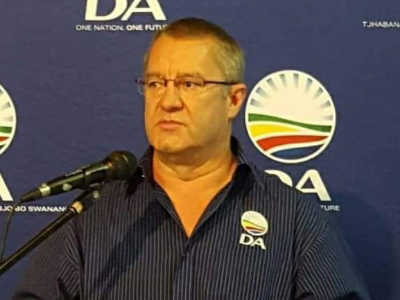 The newly-elected leader of the DA in KZN Francois Rodgers has hit the ground running, vowing to drop the ruling ANC below 50% in KZN in the local government elections this year.

The DA has a big hill to climb.

But Rodgers thinks widespread corruption leaves the ANC vulnerable in these elections.

“My topmost priority is to bring the ANC below 50%. It’s time the people of KZN taught the ANC a hard lesson.”

Rodgers, 59, is originally from Kokstad, south of KZN.

“I want to lead a united DA from the top to the bottom so we could be able to remove the corrupt ANC from power.”

He said he could not do this alone.

“Our activists will play a major role. We must go to the people and make them understand that the ANC cannot have the leeway.”

He described the ruling-ANC as a “nest of corrupt people”.

“The ANC has spat on voters’ faces. Look at Zandile Gumede. The ANC sent her to the legislature knowing that she was facing allegations of corruption. It can’t get below this.”

He warned the voters who were thinking of voting for the ANC again.

“You can’t keep voting for these people. It’s time you also give us a chance to show you what we can do for you,” said Rodgers.

The former DA Chief Whip in the KZN Legislature was elected on Saturday during a virtual provincial congress.

He takes over from his long-time ally Zwakele Mcnwango who led the DA for two consecutive terms from 2015.

Others who were vying for the provincial leader position, but lost, were current DA caucus leader in eThekwini Municipality Nicole Graham and Emmanuel Mhlongo, who failed for the second time to win the congress.