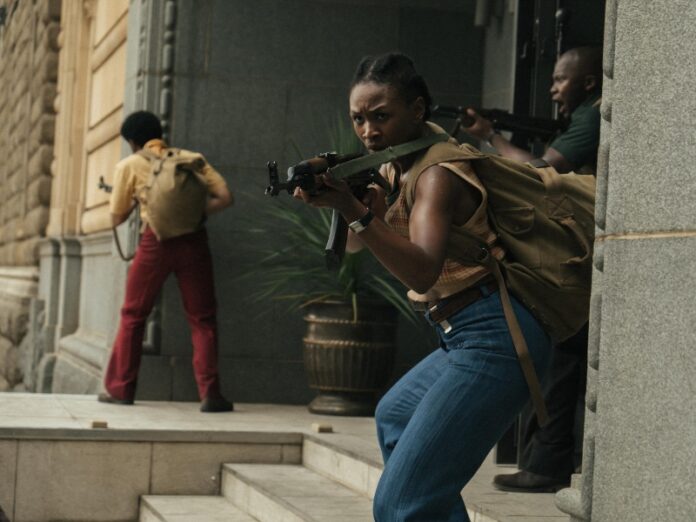 The film is based on an uMkhonto weSizwe sabotage mission on 25 January 1980, which turned into a six-hour bank standoff in Pretoria’s Silverton.

It is produced by Mandla Dube, who produced the award-winning SA film Kalushi – which is also based on true events, in this case the life of the late anti-apartheid activist Solomon Mahlangu.

Silverton boasts a notable cast of Mzansi actors. Thabo Rametsi, Stephan Erasmus and the impressive Noxolo Dlamini play the trio who were involved in a mission which sparked the global Free Mandela Movement.

“You don’t have to care about the story. You’ll enjoy it,” said Rametsi, who plays “Calvin Khumalo”, the leader of the trio. “It’s a cinema experience.” Rametsi also played the lead on Kalushi as Mahlangu.

Dlamini, who plays “Terra” – who, unlike the actual MK trio, is the only woman in the group – revealed she was excited about shooting an AK-47, during a behind the scenes interview with the cast.

“So who doesn’t want to see a female shooting an AK-47. I am sorry. That’s like the hottest thing I have ever seen,” said Noxolo, who is famous for her role as Ntombi in the dance movie Jiva.

The freedom fighter trio – in real life, Wilfred Madela, Humphrey Makhubo and Stephen Mafoko – were on their way to carry out a planned MK mission to sabotage petrol depots at Watloo near Mamelodi when they realised they were being tailed by the police.

In an attempt to escape they ended up seeking refuge inside a bank – which all three MK veterans left in body bags, following an exchange of fire with the police who were trying to save the hostages in the bank, according to SA History.

The real life action thriller film will premiere on Netflix on Wednesday, 27 April, to coincide with the Freedom Day holiday.