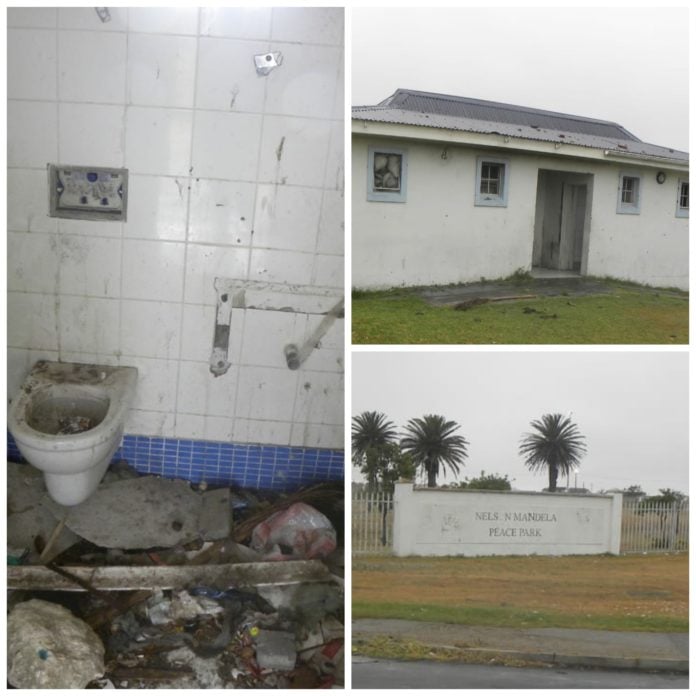 Once it was an historic park, where Nelson Mandela spoke to thousands of South Africans shortly after his release from Robben Island.

But today, the Nelson Mandela Peace Park in Motherwell, Port Elizabeth is little more than a den for criminals.

Resident and artist, Myekeni Jongani said the area used to be a piece of open ground until the Nelson Mandela Bay Municipality fenced it, built toilets and bathrooms and planted trees.

“The park became a part of the Motherwell Urban Renewal Programme in 2010,” he said.

“The  municipality tried to change the face of Motherwell. It was also an honour for us to thank Madiba because he held a rally here.”

He said there used to be a municipal security guard but now there is none.

“Vandals have stripped the place. As artists, we have nowhere to meet.”

A resident said the huge television screen and speakers that were mounted during the 2010 Fifa World Cup were stolen.

“Criminals removed the sinks and taps from the toilets and the bathroom and the guard house was vandalised.

“Mandela would be angry if he could see the park now,” she said.

Nelson Mandela Bay Municipality spokesperson, Mamela Ndamase said the municipality has noted the increase in the number of incidents around the City including damage to libraries and sports fields.

“The Safety and Security directorate is working with all departments to come up with a plan to tackle the crime,” said Ndamase.

NMBM Executive Mayor Nqaba Bhanga said he was saddened by the vandalism.

“I have decided to call a special meeting of the Mayoral Committee to formulate a strategy to deal with rampant vandalism and criminality at municipal facilities,” he said.