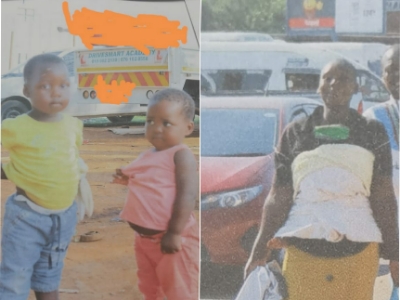 A week has passed since Suzan Makhovha and her two children Vhuthuhawe and Takalani went missing.

The three from Muledane Block J in Thohoyandou, Limpopo went missing on 6 April 2021 and have not been seen since.

According to the police, Suzan’s husband Michael Netshianda said he left his family at home when going to work last week Tuesday.

When he returned home they were nowhere to be found.

Surprisingly enough the doors of the house were closed but not locked.

The husband opened a missing person file after enquiries with relatives failed to bear fruit.

This has since sent the family into a state of panic and despair. The father of the missing woman Peter Makhovha said he received the bad news while attending a funeral of a relative at Thengwe in Mutale on Sunday.

“We started doing enquiries with relatives and we searched everywhere with no success. We can’t even figure out what could have happened but what we know is that the couple sometimes had challenges as husband and wife but were able to sort them out. What happened is still a mystery to us,” he said.

Makhovha further pointed out that the disappearance of the three has devastated the family to such an extent that they are having sleepless nights.

“Her mother Maria is not coping and I am afraid this would affect her health. She hasn’t been eating well saying she won’t unless she knows where her daughter and grandkids are,” he said.

“We have put all in the hands of God and our prayer is that the community would assist us after reading this, and we find them still alive,” Makhovha said.

Limpopo police confirmed a missing persons file was opened and requested the community to help with information and those with information may contact Detective Constable Shudufhadzo Sivhaga on 072 424 6288 or the crime stop number 0860010111or the nearest Police Station or MySAPSApp.