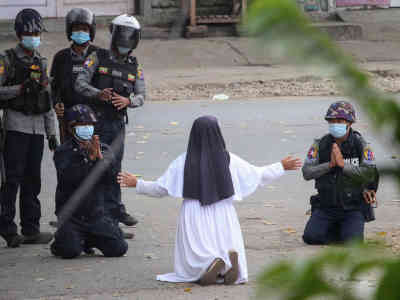 An extraordinary image showing a nun begging heavily armed police officers to spare “the children” and take her life instead has circulated across the globe.

The picture shows Sister Ann Rose Nu Tawng, 45, on her knees in front of the police officers, in armour and armed with guns in the city of Myitkyina.

Her arms are spread while two of the officers kneel in front of her, in turn pleading with her to get out of harm’s way as they prepare to crack down on a protest.

Her act of bravery comes as civil unrest continues to grow throughout the country, following the military’s overthrow of the civilian leader, Aung San Suu Kyi, on 1 February.

Protestors, who are demanding the return of democracy, first took to the streets shortly after the coup took place. In retaliation the junta has steadily increased its level of force, unleashing teargas, water cannons, rubber bullets and live rounds upon them.

As protestors took to the streets on Monday in Myitkyina, police prepared to stomp out the unrest. As they readied themselves, Sister Ann Rose Nu Tawng and two other nuns pleaded with them to leave.

“I knelt down … begging them not to shoot and torture the children, but to shoot me and kill me instead,” she said on Tuesday.

Despite her pleas, the officers opened fire over her shoulders at the crowd behind her.

“I couldn’t do anything but I was praying for God to save and help the children.” she said.

She witnessed a man being shot in the head behind her. A local rescue team confirmed to AFP that two men were shot dead on the spot during Monday’s protest.

“I felt like the world was crashing,” she said.

After the protests she vowed to continue to do all she can to protect “the children.”