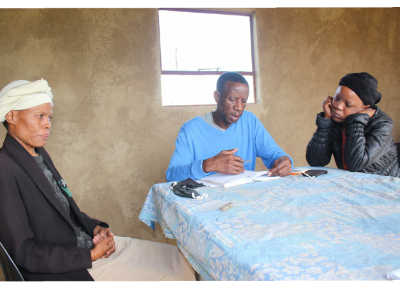 For almost three years Malebo Dikotla has been waiting for the remains of her infant who died shortly after birth.

Her mother, Esther took her to Mankweng Hospital where the young woman was examined. She was told she wasn’t pregnant and given an injection but later a different doctor realised she was pregnant and prescribed medication.

“I gave birth to a boy that day at home and went back to the hospital. Nurses checked the baby and told me he had died,” she said.

Esther said they requested a postmortem as they suspected the death might have been caused by the injection.

“The postmortem was only done in March 2019 by police. We received results in January which said they could not say what caused the death as the body was in an advanced stage of decomposition,” said Esther.

Malebo’s father, David said they requested that the Department of Health must perform a ritual and collect the spirit of the baby at the hospital’s mortuary but they were denied.

“We have a dark cloud hanging over us. We can’t attend funerals, family gatherings and events because the baby has not yet been buried. We have to bury and be cleansed,” said David.

Malebo said she is suffering from depression which forced her to quit school.

“Because I get flashbacks of the day I gave birth I sleep at friends’ homes. Sometimes I dream of a child crying. If I can bury my son, I can find peace,” she said.

Health spokesman Neil Shikwambana said the family got a lawyer who alleged that the hospital was responsible for the premature death due to the injection.

“The family disappeared and left the body at the mortuary for months. They sent us letters of demand for financial compensation through lawyers. We welcomed the lawyers believing the court will be able to give us a platform to clear our names,” said Shikwambana.

The remains of the little boy are still at the Government Mortuary.