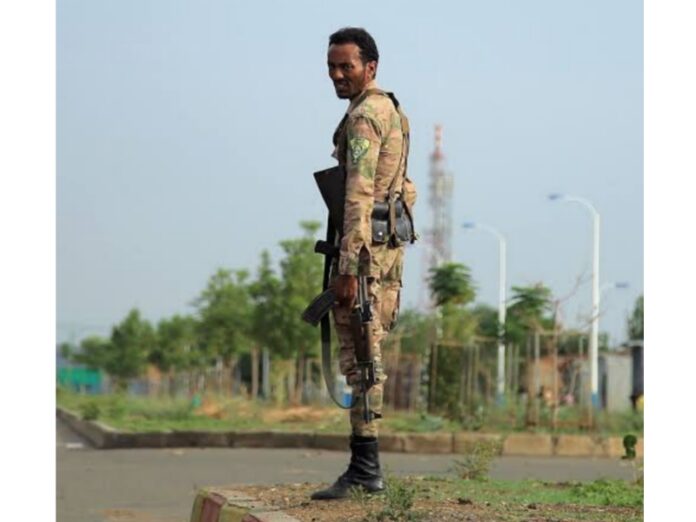 While the world’s eyes remain locked on Russia’s brutal invasion of Ukraine, another far more deadly war rages in Ethiopia.

Since the country’s civil war began in November 2020, researchers have estimated that up to 500,000 people have died.

The research, led by Jan Nyssen of Ghent University in Belgium, found that:

The war began in November 2020 when the central government in Addis Ababa, led by Prime Minister Abiy Ahmed, sent troops to put down the rebellious government in the northern Tigray region.

The Ethiopian national army was supported by militia from the Amhara group and forces from the neighbouring government of Eritrea, and the conflict soon erupted into a full-scale civil war.

Civilians were massacred and Tigray was blockaded and cut off from food and water – much of the province remains cut off.

The forces of Tigray, the home of the country’s former rulers, retreated into the mountains before launching a counter-attack in June last year that recaptured their capital Mekelle and almost destroyed the Ethiopian military.

The Tigrayans marched on Addis Ababa but in November 2021, after a year of fighting, Abiy’s forces managed to turn the tide with the use of Turkish drones, fighter jets and a rearmed ethnic militia.

The Tigrayans have retreated back into their own territory, but fighting continues in the neighbouring Afar and Amhara regions as well as in the south of the country by dissident members of the Oromo group.

Footage and news coverage of Russia’s invasion of Ukraine has been all-encompassing. This is partly because widespread social media use in Ukraine and partly because reporters have much greater access to the front lines.

In Ethiopia, both of these are massively restricted. Clips of military strikes in Mariupol fill our TV screens while next to no footage of the atrocities which have taken place in the East African country have surfaced.

Also, while journalists are prevented from showing the world the tragedy being inflicted upon millions of people, humanitarian aid has also been blocked from accessing the affected regions.

The invasion of Ukraine has, unfortunately, only made this issue worse, as global attention on the war has meant that humanitarian aid has been redirected.

“We are seeing clear evidence of this war draining resources and attention from other trouble spots in desperate need,” United Nations Secretary-General Antonio Guterres told the media on Monday.

Besides Ethiopia, the same can be said of the war being waged by Saudi Arabia in Yemen and the conflict in Mozambique.