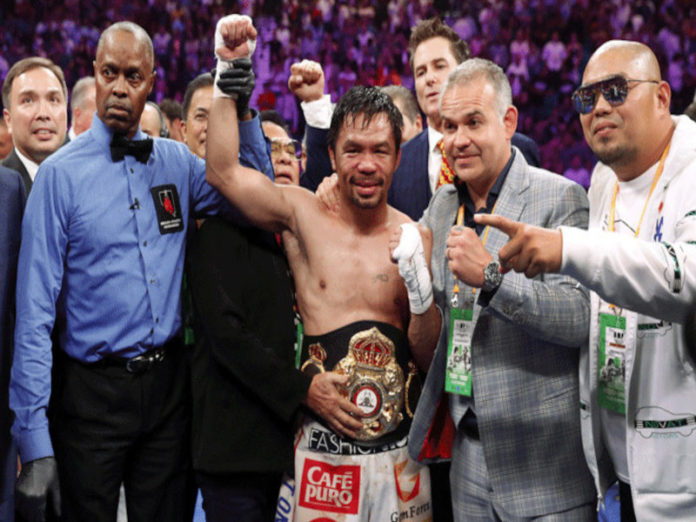 Fillipino senator and boxing legend Manny Pacquiao’s preparations for his title fight next month are totally on track – but his political hopes are in tatters.

Pacquiao was voted out as leader of Phillipine’s ruling party on Saturday, weeks after challenging President Rodrigo Duterte over his position on China and his record on fighting corruption.

Pacquiaio was seen by many as a possible contender to succeed Duterte in next year’s presidential election. However, relations soured last year after the legendary boxer railed at what he called Duterte’s soft stance on Beijing’s aggression in the South China Sea, calling it graft in the government.

Pacquiao is set to meet Errol Spence Jr for the American WBC and IBF welterweight titles in a pay-per-view main event in Las Vegas on 21 August. It will be Pacquaio’s first fight in two years after beating Keith Thurman for the WBO super welterweight crown.

While he is still reeling from his political knock-out punch, Spence Jr has promised to send him into boxing retirement. The challenger boasts a spectacular record of 27 wins in 27 fights, with 21 knockouts. But the champ believes he has what it takes to bring Spence down.

Pacquiao is the only fighter to have ever held eight-division world championship titles, and he has won twelve major world titles in different divisions.

Spence Jr, however, told Badlefthook.com that he believes if he beats Pacquiao, the champ will retire.

Tweet: The boxing legend got a knockout blow in his bid to be president of the Philippines, but will be hoping he can deliver the winning punch against Errol Spence Jr in the ring next month