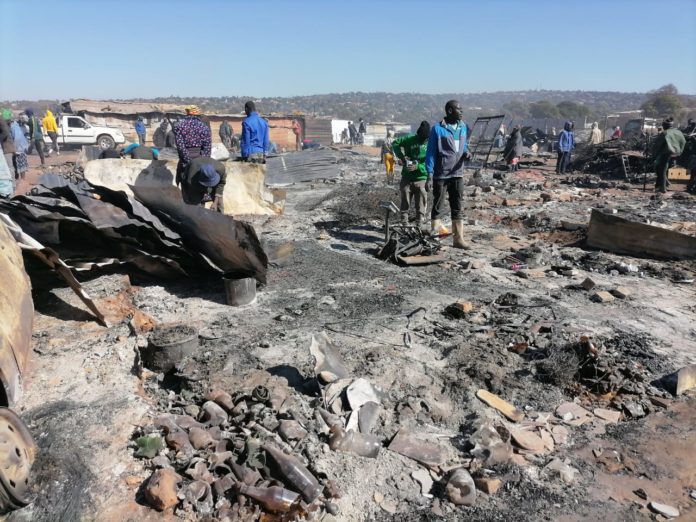 Just like last year on Mandela’s birthday, the community of Plastic View near Woodlands, Pretoria spent the day sifting through the rubble of a shack fire.

Three died and many more were injured as the fire ripped through the settlement, completely destroying more than 400 shacks. The area is a fireman’s nightmare with shacks no more than a few paces apart with many constructed using canvas and plastic sheets.

It is suspected that an unattended paraffin stove may have caused the fire which spread to the neighbouring shacks.

Mirla Ngwenya, a Mozambican national who lost her sister in the fire, said she was sleeping when she suddenly realised she was struggling to breathe and she was coughing.

“When I opened my eyes I saw flames and heard people screaming outside,” she said.

“I screamed for my siblings to wake up. I escaped unharmed but my sister was trapped inside.”

She said she stood helplessly until her sister’s cries for help stopped.

“I knew she was dead,” said Mirla.

Community leader Benjamin Masana said the only way to solve this crisis in the area is for the government to provide housing.

“Ever since I moved here five years ago we have experienced such tragedies. People leave a candle or a paraffin stove burning which leads to such incidents,” he said.

“We were promised last year that we would be relocated, but nothing has come of that.”

He said the Metro offered them food parcels but they don’t want food. They want housing.

“For the second year in a row we can’t do good deeds on Mandela Day. How can we do good deeds if we now depend on donations and hand-outs for survival?”