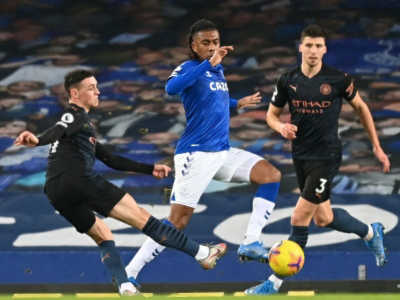 When runaway English Premier League leaders Manchester City defeated Everton 3-1 on Wednesday, they chalked up their 17th win in a row in all competitions and their 12th in the Premier League.

They are also the first team in top-flight history to win 10 opening matches in a calendar year. They have not trailed once in 16 of their last Premier League games.

Former Liverpool and Manchester United striker Michael Owen said City are peaking at the right time to win the quadruple.

“They’ve virtually won the Premier League. They’re in the final of the Carabao League Cup, they’re still in the FA Cup and who will put the Champions League past them? They could win all four this season,” he said.

Former Arsenal defender Lee Dixon agreed that the title race is over.

“City are relentless and with Sergio Aguero coming back they are even stronger up front and defensively they’re very strong,” said Dixon.

“At the moment they are in a good mood and they have fantastic quality. They have belief and they are strong,” said Ancelotti.

In the other Premier League match played on Wednesday, Burnley were held at home by Fulham in a match that ended 1-1.