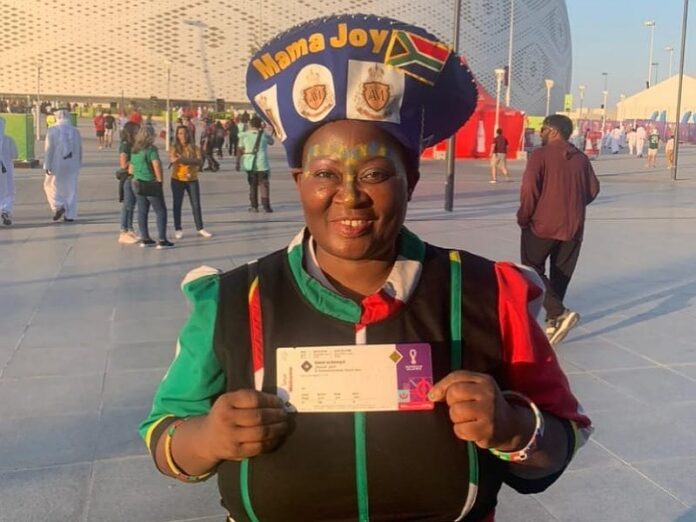 Joy Chauke, affectionately known as Mama Joy, is having the time of her life at the World Cup in Qatar.

She has been there since the beginning of the event and she will stay until after the final on 20 December.

Mama Joy was selected by the Supreme Committee in Qatar, the body which organises the World Cup, after she was recognised as one of the best football fans in the world.

She has bagged free accommodation, flights and free tickets to the games.

The first shock she encountered was how expensive food and transport was.

“You can’t live and enjoy the place if you don’t have money,” she said.

“There is free transport to move around but my hotel is far from the metro so I have to use an Uber.”

She said she follows and respects the rules of that nation,” she told Scrolla.Africa.

So far she has watched five live matches at the stadiums which included the opening game between Qatar and Ecuador, Poland versus Saudi Arabia, Qatar versus Senegal, Belgium and Morocco and Ghana versus South Korea.

Mama Joy supports all five African teams but her favourite is Ghana as most of her friends are from that western African country.

The super fan said in 2010 in South Africa it was easier for her to go to the stadium and back because she was familiar with the area.

“Qatar is a very small country and the stadiums are within an hour of each other, unlike at home,” she said.

“I feel South Africa’s event had a better atmosphere — but I am biased.”

The Royal AM FC ambassador says she wants to thank her boss Shawn Mkhize, Safa structure including the CEO, Tebogo Motlhanthe, Nyiko Masango, Swallows main supporter, Nkosinathi Zuma and Priscilla Mthombeni and her family for giving her pocket money for the event.

Pictured above: Mama Joy in Qatar