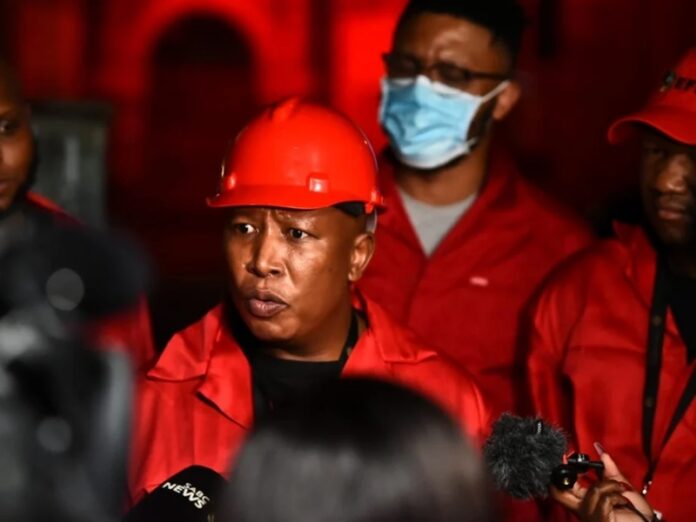 Economic Freedom Fighters (EFF) leader Julius Malema and the party’s KwaZulu-Natal chairperson stepped in to save the job of the scandal-ridden Zululand mayor, Reverend Thulasizwe Buthelezi.

The Inkatha Freedom Party (IFP) mayor faced a vote of no confidence after he was found last week to have redirected millions of rands of service delivery funds towards “VIP” security for him and his wife.

However, the vote was withdrawn on Tuesday after Malema and Chairperson Vusi Khoza threatened councillors that they could lose their jobs if they voted to remove the controversial mayor.

The IFP is in coalition with the EFF in Zululand and other KZN municipalities while the ANC and NFP are also in their own coalition as opposition parties.

Scrolla.Africa learned that the EFF councillor Thulani Ndlovu, who is also deputy mayor to Buthelezi, received a letter from Khoza shortly before the vote took place.

The letter, which instructed councillors not to vote down the mayor, was followed by an SMS message from Malema.

The letter, which has been seen by Scrolla.Africa, reminded Ndlovu that the EFF leadership is aware that he is colluding with opposition parties against Buthelezi and he must remember that the EFF is voting with the IFP in KZN.

Ndlovu told Scrolla.Africa that he was unable to comment because he was busy in the meeting.

ANC caucus chair Khaya Khumalo said they decided to withdraw this motion against the mayor because there was also a National Freedom Party councillor who appeared on both gazettes of Nongoma Local Municipality and Zululand District.

“There was also an issue of an EFF councillor which led us to withdraw the motion against Mayor Buthelezi. Because we have withdrawn the motion, we will now assess the situation and follow all the developments,” said Khumalo.

On Monday, community members who were led by the ANC Youth League and Sanco marched to Zululand in Ulundi demanding Buthelezi’s resignation.

Buthelezi told Scrolla.Africa that he won’t be able to comment, while EFF leadership couldn’t be reached for comment as Khoza’s phone rang unanswered.