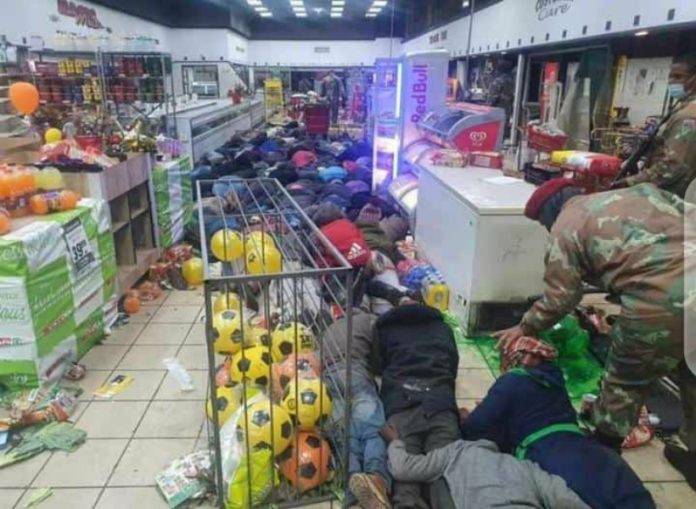 The owner of the furniture factory, where six alleged looters have been found burnt beyond recognition, has expressed her condolences to the families of the bereaved.

“It is painful that some families have lost their loved ones in such a gruesome manner. Our condolences go out to them,” said Evelynn Khumalo.

The bodies found inside the furniture factory in Umzimkhulu, KZN on Sunday night have been taken to mortuaries. The police are appealing to the South Coast community to go to their nearby government mortuaries to identify their family members.

Evelynn said it would take a long time to rebuild the 30-year-old factory completely and said her ten employees would be left without jobs for a few months.

“The damage done here amounts to many millions. But we have to rebuild, we have no other option.”

In a separate incident in Umlazi, families of the missing looters are worried that they might have died inside the Rhino Cash & Carry, which went up in flames last week.

Gugu, who didn’t want to give her surname, said her uncle was among the looters who went to the supermarket but did not return.

“We have looked for him everywhere without success. We were told that he wasn’t part of the looting at the supermarket.”

The family said they have searched for him in mortuaries, hospitals and police stations without success.

An employee said the centre management believed some people might be trapped in the rubble.

“We were supposed to go back to work on Wednesday to clean up, but we were turned away because the management believed that there were still bodies of the people that died during the gas explosion,” said the worker.

According to the employee there is a terrible stench in the building.

More than 200 people have died due to last week’s riots.

The National Joint Operational and Intelligence Structure (NatJOINTS) has asked people to search for their family members who might have died in the riots.