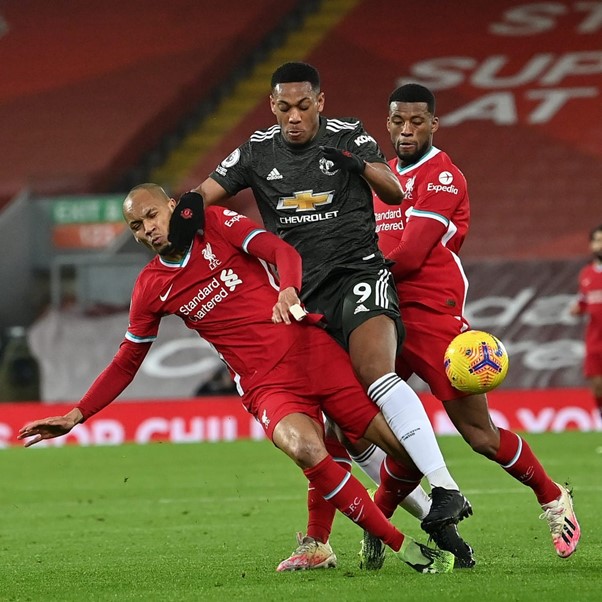 Manchester United remain at the top of English Premier League (EPL) after holding Liverpool to a 0-0 draw at Anfield on Sunday night.

The Red Devils are still three points clear of the Reds.

The draw didn’t do any good for Liverpool. They are now in third place with Leicester City taking second spot after they triumphed in their encounter on Saturday.

The win left Leicester two points behind leaders United and one ahead of Liverpool.

Without a win in three, this is by far Liverpool’s worst run this season.

United’s draw became their fourth match in a row without a win. They last won a match back on December 19 when they humiliated Crystal Palace 7-0 away.

Their inconsistency has seen them surrendering their top spot to United in midweek down to second. Things went from bad to worse for them as they also had to let go of their second place on Sunday and they could still get even worse for them.

By Monday they could find themselves further down in fourth place should Manchester City win their match. The draw away to last season’s EPL champions helped United to consolidate their top spot.

United coach Ole Gunnar Solskjaer, however, believed his team should have done better against Liverpool. After the match he told Sky Sports that a point is better than nothing.

“We want to win every game so you can’t be standing here smiling too much. To be fair I think we should have done better. But we will take a point, it’s a good positive for us walking away with one point against the champions,” said Solskjaer.

With matches coming thick and fast United will fancy their chances against third from bottom Fulham in their midweek match. Red Devils will be away on Wednesday night at Craven Cottage where they will be looking to add to their points tally.

Liverpool are also playing on Thursday and they will be at home against Burnley at Anfield.