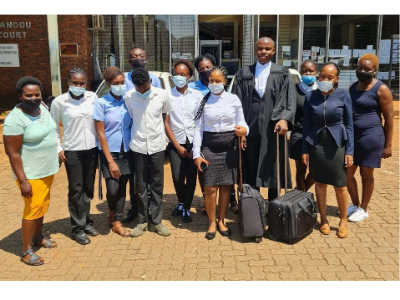 Some 137,000 learners who wrote the matric exams last year and failed now find themselves cast out of South Africa’s schooling system.

Their school principals say they do not readmit repeaters and other schools reject them too.

Having gone through 12 years of schooling, thousands of these learners will struggle throughout their lives to find a job without a matric certificate.

Now the Limpopo High Court has thrown a lifeline to learners in this position across the country, after a group of parents launched an urgent application against the government at the end of last week.

The landmark ruling says it is unlawful for the Department of Education to prevent learners who failed Matric from repeating their class.

The ruling could open the floodgates across the country. It breaks the vicious cycle that forces parents and grandparents who have no money to dig deep to fork out money to pay for costly private finishing schools.

Malwandla Chauke, who wants to repeat so she can study law, is one such learner – and one of the applicants in the case.

Her school, Shirilele Secondary School at Mavambe in Malamulele, wouldn’t allow her back to school because the Department of Education’s policy doesn’t permit it.

The court order now compels the education department to allow the group of learners to repeat Grade 12 as full time candidates.

After the ruling, Malwandla couldn’t hide her excitement.

“I want to study law at Tshwane University. I imagine sitting at home doing nothing with my dream being blown away. I’m glad we are back at school. I will study hard and get distinctions for my dream to come true,” she said.

The lawyer who won the case is Limpopo attorney Terrance Maluleke from Mvundlela &  Associates Attorneys Inc.

Maluleke said he was approached by one of the parents, and did the case for free. The parents came to his office on March 5th, and he was in court the next day.

“I felt they had a genuine case which was urgent and on Friday we went to court. We did this without charge because we felt their rights were being trampled on.

“The victory could have a far-reaching effect as many learners countrywide are in the same situation.”

Here is a timeline of how parents of learners from Shirilele Secondary School were sent from pillar post while fighting for the education of their children: