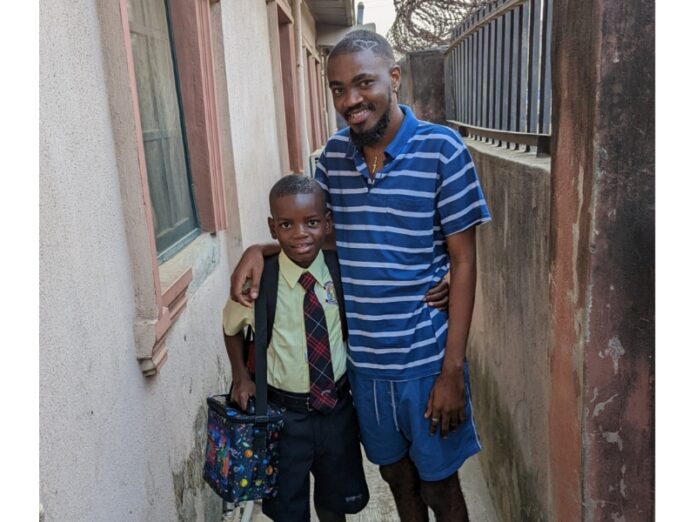 About a year ago, I found this little boy in the slums of Ikorodu. It was raining heavily. I had just alighted at my bus stop when I spotted him picking up scraps from the floor and putting them into a sack. He was undeterred by the downpour.

I walked up to him – his name is Sunday – and took him to a shed.

Sunday was shivering terribly and spoke very incoherently. He had very yellow eyes with a lot of facial scars which is quite disturbing for a boy that young. He was no more than 10 years old, but he had the eyes of one who had been through the terrible rigours of life.

I asked if he was hungry and he nodded in the affirmative, so I got some food and took him to the community health centre, where he was diagnosed with a blood infection and malaria. We got the required medication and my friend took him home.

I couldn’t stop thinking about him when I got home that night. I had just recently moved to Ikorodu that month to be closer to a chess project we had running in the Majidun slum.

I put up the picture I had taken on that day on my WhatsApp status and asked people to donate some money so we could get him new clothes. A few friends reached out and we got him new clothes and some really cool kicks to match.

We set out to where they lived to give the boy the new clothes and maybe even meet his family. We met the father, who also wore very tattered clothes, and my heart sank. They lived in one of the worst places I had ever seen in my life – a zinc container on a river.

It was a deplorable sight to say the least. They had no furniture, save for a wooden mat and a little stove on the floor. They had to bathe and relieve themselves in the river. We met the boy bathing in the river.

We sat on the floor to talk to the boy’s father when a little skinny girl walked in with a basket of fish. She had just returned from hawking fish the entire day, her name was Odunayo, and she was the boy’s elder sister.

The man explained in his Yoruba dialect that he was a petty fisherman, but he also sold firewood on the side as he made very little money from his fish business. It was hard to tell how old he was, he had very yellow eyes and terrible wrinkles.

His wife died three years ago from malaria. She was pregnant. He had a three-year-old son, who also died from malaria. They both died in that zinc container because he didn’t have enough money to take them to the hospital while they were sick. I cried.

For them, going to the hospital was a luxury reserved only for the “rich people”. I could relate to this. Throughout my childhood, we never went to a hospital, it didn’t matter how sick we were, it was always herbal treatment or the local nurse who treated us.

Sunday and his sister Odunayo were the only ones left with their father.

Sunday has lived a tough life. He missed out on the innocence of being a child and had to grow up on the streets. He was very notorious in the community for causing trouble. He was badly beaten once for stealing a dog and selling it so he could buy food to eat – hence the scars.

We had only wanted to bring Sunday new clothes, but this was an even greater tragedy. I had seen poverty and suffering before, but I had never experienced it like this.

I shared the family’s story on the radio and a lot of kind-hearted Nigerians reached out to support. We raised about a hundred thousand naira ($200) to get food for them. Nigerians are amazing people.

I visited them to teach them to play chess and prepare them for their first classroom experience on a full ride scholarship courtesy of @chessinslums.

They were unfamiliar with the letters of the alphabet, but that’s OK.

But that’s not where the story ends.

I adopted him and he has lived with me ever since. The girl lives with my mum now and is also back at school.

Sunday’s first day back at school was Monday!

He aced his entrance examination and will be starting from Primary one.

And he’s so gooooood at chess too!

* Babatunde Onakoya overcame adversity and uses chess to spread hope and inspire children in one of the poorest slums in Nigeria.