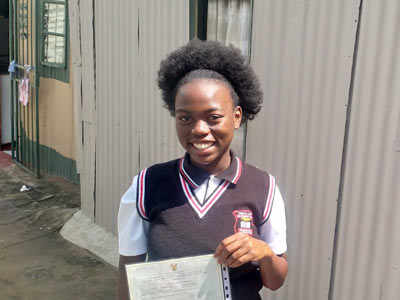 Last month, Scrolla.Africa published an article about Tshepang Komanisi, a learner from Diepsloot Secondary School No 3 who defied the odds to achieve five Matric distinctions.

She lives in a one-room shack and her classroom is a converted steel container for 67 pupils.

Her dream was to study architecture.

Now Tshepang has been offered a bursary from the Department of Public Works and Infrastructure to study architecture at the University of Johannesburg after Scrolla.Africa published her story.

She received a letter from the department on Wednesday, which read, “This letter confirms that the Minister of Public Works and Infrastructure granted a bursary to Ms Tshepang Jeanett Komanisi for full time study.”

Tshepang said in February that she dreamed of becoming an architect but had no money to continue with her tertiary education.

She told Scrolla.Africa this week that after the article was published, many people got in touch to offer support to help her achieve her goal.

One notable example was Ntokozo Masango from the South African Council for the Architectural Profession (SACAP).

Tshepang said, “Ntokozo contacted me and told me that he saw my story and was interested in helping me in going further with my studies. I jumped with excitement hugging my father after that phone call.”

However, Tshepang’s recent achievements have been overcast by a family tragedy.

On 10 March, her mother passed away after suffering from meningitis.

After she received the life-changing call from Ntokozo, she said, “I cried and wished my mom had seen this. She died proud and praying for me to thrive in what I believed in.”

“SACAP discovered through the Scrolla.Africa facebook page that Tshepang’s dream is to become a qualified professional architect and join a highly male-dominated profession.”

He continued, “Once we had received her interest to study architecture and the financial challenges she faced before she could achieve her dream of becoming a professional architect, we immediately communicated with the Minister of the Department of Public Works and Infrastructure to consider awarding the aspirant professional architect a bursary. The Minister did not hesitate to award her a full bursary to study architecture.”