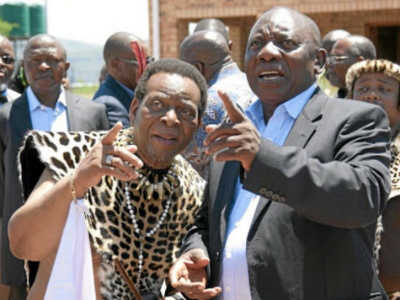 President Cyril Ramaphosa will deliver the eulogy at the memorial service of King Goodwill Zwelithini kaBhekuzulu on Thursday.

The longest-serving monarch of the AmaZulu nation, who led for 50 years, was laid to rest in a private ceremony on Wednesday morning.

The service was only attended by men – in line with the king’s wishes.

Thousands of mourners lined the streets of Nongoma when the body of King Zwelithini was transported to the KwaKhethomthandayo Royal Palace.

Donning their traditional attires, Amabutho sang, and women ululated when his coffin passed to his palace.

The family has been keeping the name of King Zwelithini’s successor a secret until he was laid to rest. As reported earlier this week, there have been tensions in the royal household over the succession plan.