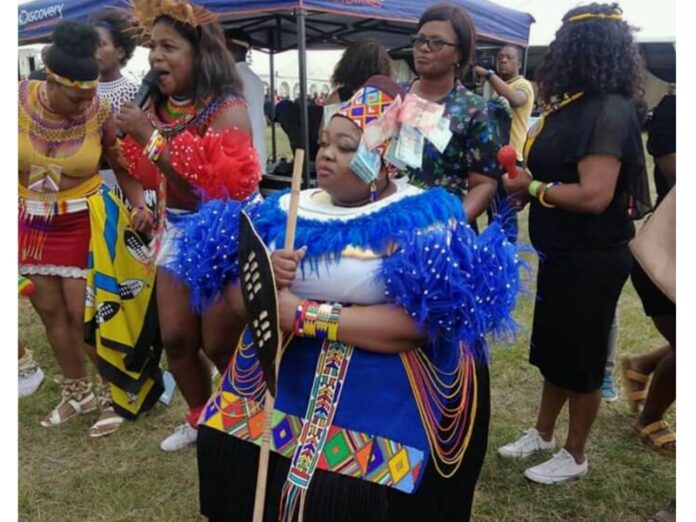 King Misuzulu’s household kwaKhalamankengane is said to be divided over His Majesty’s first choice fiance, Queen Ntokozo kaMayisela, leading to her becoming the target of online abuse.

Princess Bukhosibemvelo and the fiance of the king’s brother Bambindlovu, Lavilakati, recorded a video in which she makes scathing comments about someone’s weight.

The princess then shared the video on her social media account.

According to a source close to the feud, the target of the prickly comments is in fact Queen kaMayisela.

In the 30-second clip, Bukhosibemvelo is heard making the quip that beauty runs within the family alongside “size 32 figures”.

“As you can see how beautiful we are. I am with my sister-in-law Bambindlovu’s fiance uMphemba, Lavilakati. I love all my sisters-in-law. Beauty runs in the family, like size 32 figures,” said Bukhosibemvelo.

Of the eight biological princes and princesses of King Misuzulu, only Lungelo and Simangaye graced the king’s uMembeso ceremony held in Newcastle on Saturday.

The source revealed that some family members don’t feel comfortable in kaMayisela’s presence.

Scrolla.Africa has been informed by sources close to the royal house that Nozizwe kaMulela is the favourite. Some members of the kwaKhalamangengane household even joined her in a traditional beer-drinking ceremony, umkhosi wamaganu, in Swaziland over the weekend.

In another longer video, Bukhosibemvelo is heard praising praising kaMulela.

“We know the late queen dearly loved you. Now we’ve got the wife in the family. Even the SAPS officials of the late King all speak in one voice,” Bukhosibemvelo said, admiring kaMulela.

Royal household liaison officer Prince Thulani Zulu said: “I doubt that it was compulsory for them to show up in Newcastle. There are many events happening nowadays. Each and every household has its own news. I don’t want to dwell too much on gossip, especially relating to them as I am a father.”