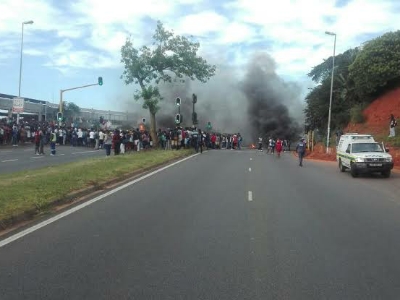 Workers and school children – excited to be going back to school for the first time this year – were forced to go home after the busy Griffiths Mxenge Highway was blocked with burning tyres and rubble on Monday.

The protest is by residents from Emhlabeni informal settlement in Umlazi, who are demanding houses.

The M4 highway which connects the southern Durban areas with the CBD was also partially closed near Isipingo.

The residents said they have waited for more than 15 years for RDP houses.

“We are tired now. The only language our government understands is protest. We don’t want to cause this havoc but we have no option,” said resident Thabani Ngcobo.

The angry residents dispersed after the police arrived but they said they will continue protesting until their demands were met.

Sfiso Mkhize told Scrolla.Africa not only do they not have houses, they also don’t have toilets.

“I know that some people are angry with us for doing this, but we have to do this to get what other people got more than 15 years ago,” said Sifiso.

“Government has been telling us for 15 years that it doesn’t have the budget. But we see other informal settlements getting RDP homes every year.”

eThekwini municipality condemned the blocking of the highway, saying it was unlawful.

Provincial police said no arrests were made at the protest.