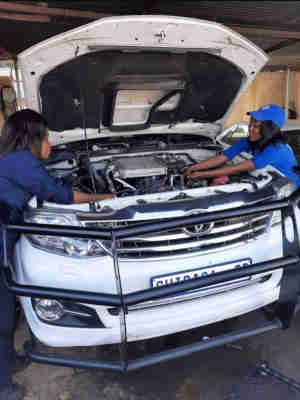 Through his township car workshop Kgabo Boshomane is teaching young people the skills to fix cars as he points them towards their dreams.

More than 80 young people have benefited from his workshop, Kgabo Cars, in Soshanguve, Tshwane.

When Kgabo started his workshop in 2010 while he still had a day job, he wanted to empower the youth and started inviting young men to help him.

“Before I became a mechanic, I studied teaching but I never graduated. My passion has always been with cars,’ he said.

“I made a promise to myself that I will become a mechanic. But I also decided I will not deliver sloppy work.”

In 2012, while still working part time he decided to open an artisan centre at his workshop and it was a success.

So far he has produced 82 artisans of which 20 are women. Almost all of them are currently employed in different companies across the country.

He is currently working on a project to open training schools for eight females so they can do the same thing he is doing.

Kgabo said he has been working with Sita and other private companies that have supported his course but he does not have any sponsorship.

He said it has always been hard working without government help because he is expected to be compliant and have qualified mentors for his students.

“I wish I could get a permanent sponsorship so that I could help more youth.”

At the moment he has 40 pupils.

Kgabo has won different awards including the Automechanica Absa South Africa award, the  Tshwane Mayoral Award and the Township Enterprise award, among others.