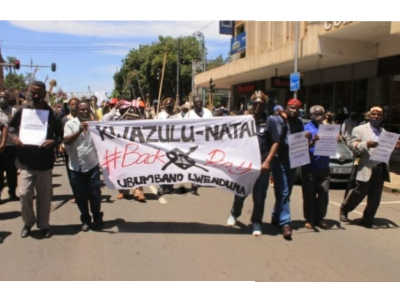 More than 3,000 izinduna in KZN are demanding R1,4-billion in back pay promised in 2014 by then president Jacob Zuma.

It’s an amount that could bankrupt the provincial government if it coughed up.

But if Auditor-General Tsakani Maluleke has his way, the izinduna may not get a cent.

The AG has warned the KZN government against paying this amount from the already-strained public purse.

The izinduna have held a series of marches and are asking for the money promised to them when Zuma signed the proclamation for their salaries in 2014.

Induna Dumisani Khuzwayo of the Qwabe clan from Maphumulo to Ndwedwe said the government was starting a war it could not win.

“This is nonsense. We have been waiting for many years for our money,” he said.

“The government must cut the bloated salaries of its employees. We must all have a fair share of government wages.”

He said it was wrong that their monthly salaries of R9,000 have not increased since they started in 2017.

In 2019, the province paid R334 million in salaries to izinduna.

“The AG’s report has pointed to existing risks such as the payment of izinduna.”

The AG’s report also flagged the Department of Health’s medical claim as a dent in the provincial budget.

Zikalala said: “We must stay on course to be a province that is characterised by clean audits and good governance. Of importance is that we must be able to account for every cent that we have been charged to look after.”

The government has maintained that it does not have the money, threatening to go to court to avoid paying the back pay.