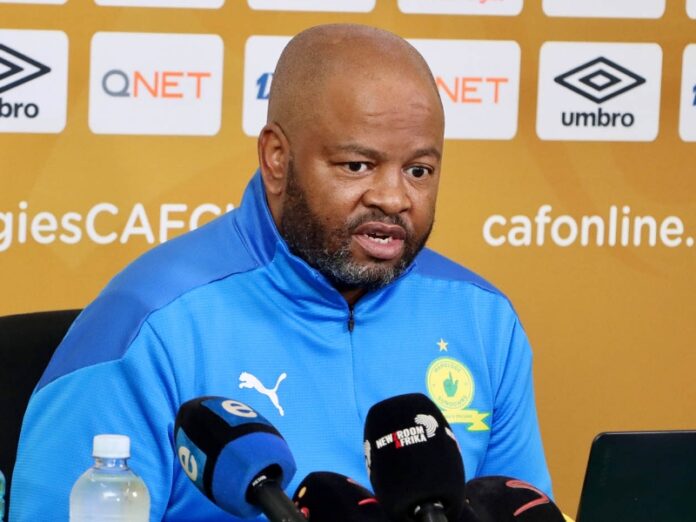 Mamelodi Sundowns were favourites to lift the CAF Champions League trophy. But their shock exit on Saturday left co-coach Manqoba Mngqithi in pain.

He could not hide his disappointment after Downs were booted out of the competition for the second consecutive season in the quarter-finals.

“It’s hurting too much. I don’t wanna lie. In the Champions League unlike the PSL, if you make one or two stupid mistakes, you can be punished,” said Mngqithi.

Last season they were eliminated by Al Ahly. On Saturday night history repeated itself when they lost out to the Angolan Petro de Luanda.

Mngqithi added that the goals they conceded away were bad and his lads were not in the game, especially in the first leg.

“What is very unfortunate is I still believe that our team was a better team on the day. But that doesn’t count when you did not put balls into the net.

“So, it hurts because you know that your team is better than what it delivered, especially in the first leg. Probably 70% of the team did nothing to perform to full potential, but today (on Saturday night) I won’t falter. I would say we didn’t take our chances and we got punished,” he said.

Against the Angolans, Sundowns did not perform at their best compared to what they did against competition title holders Al Ahly. They managed to defeat the Egyptian giants in both legs in the Group A encounter.

After finishing Group A on top and unbeaten, Masandawana were favourites to win this season’s competition.

But they were shocked by the Angolans in the first leg away as they suffered their first defeat, losing 2-1.

Despite that defeat they were expected to make a comeback when they were at home.

But things didn’t go their way as they drew 1-1, allowing the visitors to go through to their first semi-finals.

The Angolans will now play Moroccan outfit Wydad in the second semi-finals, while Ahly will take on Algeria’s ES Setif in the first semi-final.