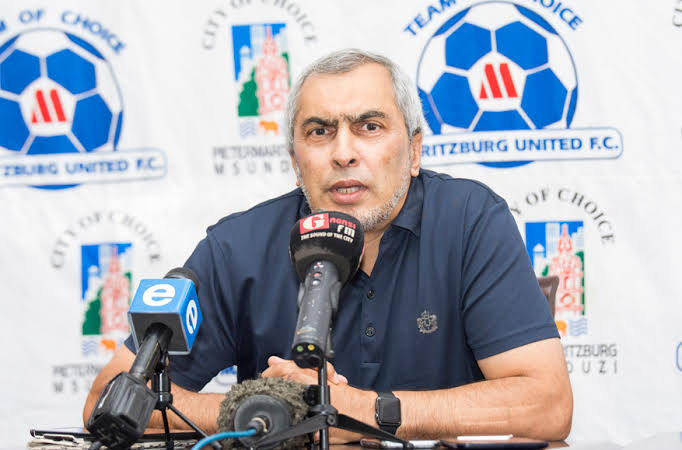 Maritzburg United chairman, Farouk Kadodia, revealed to Scrolla.Africa that they are busy shortlisting for the coaching seat left vacant when coach Eric Tinkler was shown the door on Monday morning.

Asked if the incoming coach will be appointed on a permanent or interim basis, Kadodia said they are looking at getting a permanent coach.

“We want him to start working on the team as soon as possible and help us move away from the relegation zone. This is not an interim position,” said Kadodia.

Ernst Middendorp will be on the bench when they welcome Supersport United at the Harry Gwala Stadium on Friday. He will be looking to secure the first victory for the team.

The coastal-based team has had a good relationship with former Kaizer Chiefs technician Middendorp in the past and has had two stints with them.

Middendorp is currently employed in Ethiopia but he has asked his team to release him.

Tinkler lost his job after the team’s poor performance in the bio-bubble and in the current campaign.

Maritzburg is rooted to the bottom of the DStv Premiership after playing four games without a single win to show for their trouble.

Kadodia said he knows the anxiety and strain of fighting relegation in the last gasp following their 2018/2019 promotional play-off. At the time, Tinkler was the man at the helm and managed to save the status of the team.

Kadodia is adamant that what happened in the past is in the past. He said the coronavirus outbreak affected his team’s performance but other teams are performing well.

“The pandemic affected all the other teams in the league, but they are not in the same position as us. It is about time we get a new coach because the team is not safe from relegation at all,” said Kadodia.