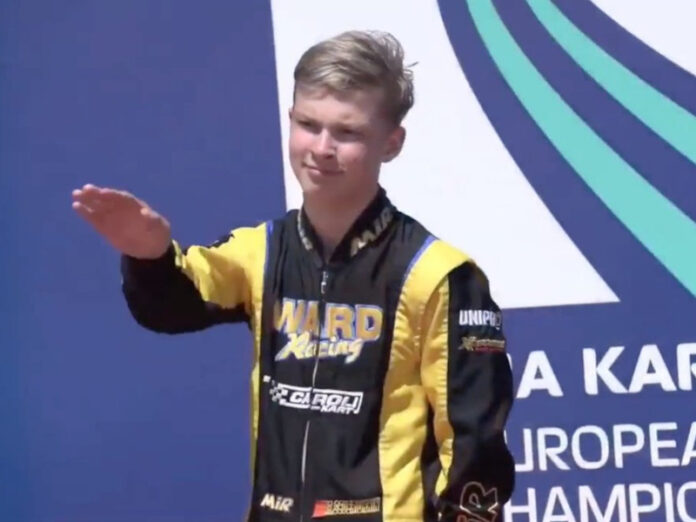 A 15-year-old Russian karter has apologised for performing a Nazi salute whilst standing on the podium after winning a race in Portugal on Sunday.

Artem Severiukhin is seen in a televised clip beating his chest twice before raising his arm in a Heil Hitler salute, the official Nazi salute of Germany during World War Two.

In recent years, the salute has come to represent extreme facism and has been adopted by supporters of neo-nazi groups and far-right politics.

Severiukhin was sacked directly after the incident by his team Ward Racing and an investigation into the matter was opened by the FIA, motorsport’s world governing body.

On Monday, Severiukhin uploaded a video in which he apologised for making the gesture.

Speaking in Russian, he said: “I want to apologise. I have never supported Nazism and consider it one of the worst crimes against humanity. I am ready to be punished but there was no support for Nazism or fascism,” he said.

Swedish-based team Ward Racing released a statement announcing that they would be severing ties with Severiukhin.

“The actions of Artem Severiukhin during the award ceremony after the first round of the European Championship, were exclusively individual and do not represent the views and values of Ward Racing in any manner,” read the statement.

“On the contrary, Ward Racing stands with the international community condemning Russia’s invasion of Ukraine and expresses its solidarity with the people suffering because of this unprovoked and horrific attack.”

In the statement Ward Racing said they didn’t see any possibility for continued cooperation with Severiukhin.

“We will proceed with terminating his racing contract,” they said.