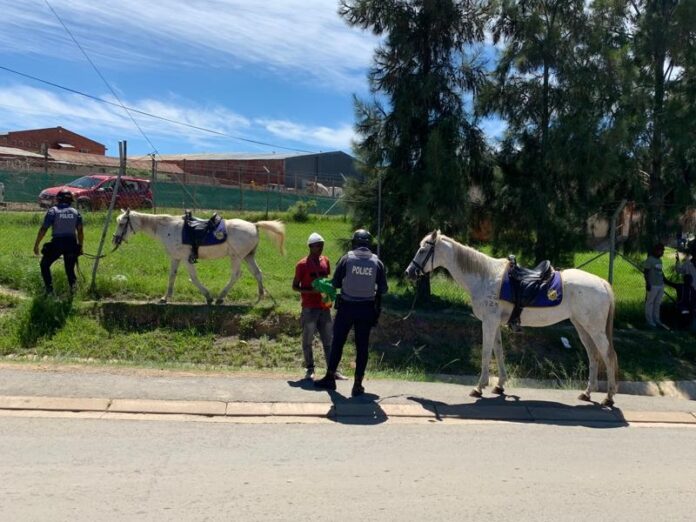 There is nowhere to hide for petty criminals and drug pushers in EmaXesibeni in the Eastern Cape when the SAPS Mounted Unit is in the town.

The town has been terrorised by knife-wielding bag snatchers, house breakers and drug pushers known as amaphara.

They target the elderly on pension days, and break into the rented flats of public servants to steal their possessions.

EmaXesibeni is the official home of the Alfred Nzo District Municipality and regional head offices of many government departments are based here.

While people are at work, thugs break in and steal laptops, clothes, jewellery and expensive sneakers.

The SAPS Mounted Unit comes to town during big cases at the local magistrate’s court to help with crowd control.

They were in town last week for the bail application of Pastor Vizicelo Phakade of the popular God’s Power Family Church, who is charged with raping a 16-year-old schoolgirl.

As there was no disruption outside court, the police rode into town where they surprised amaphara, spot searching them for weapons, drugs and stolen belongings.

The community has welcomed this form of police visibility in the town where police hardly patrol even on busy days like pension days.

On Saturday night they broke into the flat of Onele Sivuka, a media studies final year student from Nelson Mandela University in Port Elizabeth who is about to conclude a 10-month internship.

“I think they must have been monitoring my movements,” she told Scrolla.Africa.

“I was at work that night and they broke into my place and stole two laptops and laptop bags. They didn’t take anything else.”

She said she was tempted to visit an inyanga.

“I seriously thought of visiting a traditional healer to get muthi to cast an evil spirit on those who robbed me,” she said.

She said only one of the laptops was insured. She opened a case with the police but she’s not expecting any results.

In the case of marketing executive Avela Theni, neighbours witnessed the housebreaking and caught the criminal red-handed with her laptop.