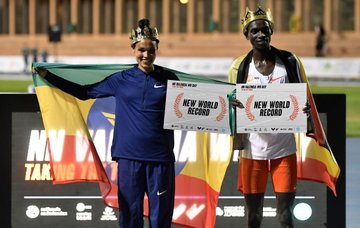 Letesenbet Gidey, 22, of Ethiopia broke the world record in the women’s 5,000 meters that had stood for 12 years.

She was competing at an event in Valencia in Spain.

Uganda’s Joshua Cheptegei broke the men’s 10,000 meters at the same event, ending a record that had stood for 15 years.

All of the events featured wave-light technology – flashing green bulbs that chase them around the track at record pace.

The lights, developed in Holland, are not the only technology making for speedier times.

Cheptegei, Gidey and the whole generation of distance runners have turned to high-tech shoes, such as Nike’s Dragonfly and Vaporfly spikes.