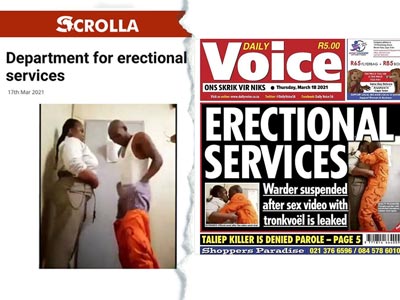 The Daily Voice’s headline writer has a bad case of headline envy.

The story was about the suspension of a warder for an explicit sex tape, circulating on social media, of her having relations with a prisoner.

The only problem was that Scrolla.Africa posted the sex tape story on Tuesday night, 36 hours earlier.

Our headline: “Department for Erectional Services.”

There is an old saying that imitation is the sincerest form of flattery.

But we are concerned for the Voice headline writer who clearly failed to rise to the challenge – to avoid shrinking circulation.