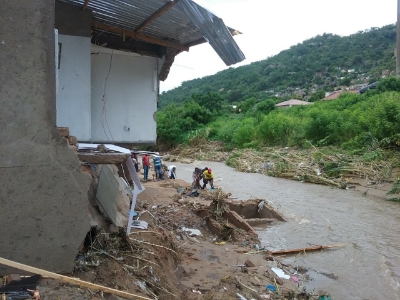 A desperation for housing stands, family plots and greedy headmen are directly responsible for the needless deaths of people during the rainy season.

“Headmen who allocate stands next to the rivers, dams and water streams after an exchange of money, must be arrested for the drowning and fatalities during this period,” Inkosi Ngomane said.

Hundreds of desperate people in Kanyamazane, Mbombela continue falling prey to unscrupulous headmen who are taking advantage of the desperate situation and charging as much as R20,000 for a piece of land.

The majority of the homes that were swept away by Cyclone Eloise were situated in wetlands, swamps and floodplains.

Jabulani Ngcobo told Scrolla.Africa he came from Gauteng and got land because he thought he would save money.

Ngcobo and several others who were affected at Kanyamazane were evacuated and are currently sheltered at evacuation centres which include schools and churches.

Mpumalanga has been one of the hardest hit provinces suffering a torrid aftermath from the damage caused by Cyclone Eloise.

A victim at Kanyamazane’s informal settlement, Sipho Makulube was swept away with part of his house which was built next to a stream and the search to recover his body is still ongoing.